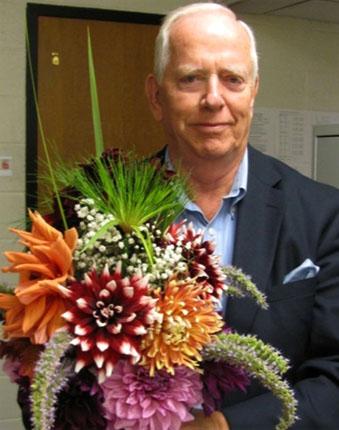 Bob Hathaway has seen many changes since his first year as a Century College English faculty member in 1968.  "We were meeting in the old Washington School building on 4th Street in White Bear Lake, and we also met in a Presbyterian church across the street.  We moved to the West Campus in 1970," he remembered.

Bob was on the original task force to establish developmental education in the 70s and 80s.  "Merging with the 916 Vocational Area Technical Institute was a huge undertaking because we had to bring the Vo Tech courses up to a credit system and an accredited system.  The merger was a valuable move for the college and the students and was well worth it, because it broadened the appeal of the college," he said.

"We were on the quarter system then, which was much more efficient than semesters," Bob noted. "We started the semester system in 1998 and that was another huge undertaking, as they had to totally redo the curriculum, change courses, and rewrite syllabi for all courses."

One of the things that hasn't changed over time is the appeal of literature, and British literature in particular (Marlow, Chaucer, Shakespeare, John Donne, and Milton), as well as the the experience of being in a classroom.  "The classroom experience is invaluable.  Students learn from the course and they learn from each other.  They learn how to get along and how to handle difficult situations. The classroom is one of the most exciting places to be--very stimulating, very enjoyable," Bob observed.

Additionally, Lakewood Junior College established a Writers in Residence program in the 70s that was very dynamic, he remembered.  "We had writers such as Bill Holm, who was affiliated with us for three years.  Today, Century College is one of the few places that has a Writing Center, which plays a vital role in English curricula."

Bob has also been involved with the Century College Speaker Series, and is proud of the caliber of speakers brought to campus in the last few years, including author and artist Marjane Satrapi, autism expert Temple Grandin, poet Billy Collins and scientist Steven Pinker.

Additionally, he has enjoyed acting with Shakespeare and Company, and performances are held at the College during the summer.  He's also played the lead in past Century College Theatre productions such as "The Fantasticks", "My Fair Lady", "The King and I" and "Camelot".  In his spare time, he enjoys "raising" and arranging bouquets of flowers from his garden.  He's well-known for bringing flowers in to different offices around the campus.

"I'm proud to be associated with Lakewood and Century College.  The College has made an enormous contribution to the intellectual milieu of the community, " he said.