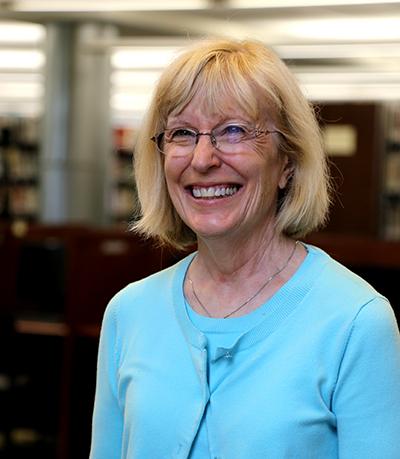 Cheryl Langevin, Century College librarian, knows the College's history better than anyone else.  She was not only in the first graduating class in 1969, when the College was known as Lakewood State Junior College, she was also hired as the first librarian for the 916 Vocational Technical Institute (which was later renamed the Northeast Metro Technical Institute, and which merged with Lakewood to form Century College in 1996.)

"My sister, Kathy DeShane, worked at Lakewood at the time, and told me they were building a new school across the street.  She told me to apply for a job in the library,"  she remembered.  Cheryl was finishing her bachelors at the University of Minnesota, minoring in Library Science, and wanted to be a librarian. She wrote a letter to the College, interviewed, and the administration asked her to start a new library at 916.  "Being young and ambitious, I said, 'Yes, I can do that,'" Cheryl laughs.

Back in 1971, the library was set up in a temporary headquarters in North St. Paul, and had one shelf with vocational technical education books, along with learning guides for students and other resources that supported the competency-based education at 916.  She helped move the library to the new building on East Campus in 1972.

It was a non-traditional, special library--that is, a library that specializes in specific information resources. There were seven learning resource centers which reflected career areas 916 specialized in, such as transportation, and Cheryl ordered & cataloged everything for the Learning Resource Centers. "I fell in love with vo-tech education.  There was something going on every minute in the building, " Cheryl notes.

The library evolved along with changes in education, and the college slowly wanted a more traditional library. "In the 90's, the College was getting away from competency-based learning.  With changes in technology and the rise of online learning, we've come full circle," Cheryl observes.

When Lakewood and 916/North East Metro Technical College merged in the mid-90s, there was pressure for both libraries to merge as well, despite the fact that the libraries had different missions and served different clientele.  Cheryl's library collection was focused on vo-tech-careers and there was no liberal arts information, for example.

The two libraries moved into the new Science Library building on East Campus on during the summer of 2008, no small feat, and the grand opening was held on September 18 of that year.  “I can’t say enough about our library staff. It's incredible what we accomplished in such a short time." Cheryl says, "Our staff are amazing and very dedicated.  We learned a lot about teamwork with our libraries merging."

Cheryl enjoys working with changing technology, and notes that in recent years, the library staff have focused on providing information literacy to students. "What’s fun is that you’re constantly reinventing yourself with new technologies, and you have to keep up with the changing ways of finding credible information. Students depend on Google searches for their research, assuming they are correct.  Yet, there’s a lot of fiction on the Internet and very little fact.  We stress how to use our online resources because they have been vetted."

Our library staff are very customer-service oriented—We're always asking, 'What do the staff, faculty & students want?'  This library isn’t ours.  It belongs to staff,  faculty,  students and the community. It’s theirs.  We’re taking care of it for them."

Cheryl will retire in August 2017, and says, "I’m sad to leave, but I feel good knowing that the library is in great hands, with an excellent and dedicated staff.  I'm leaving on a high note."