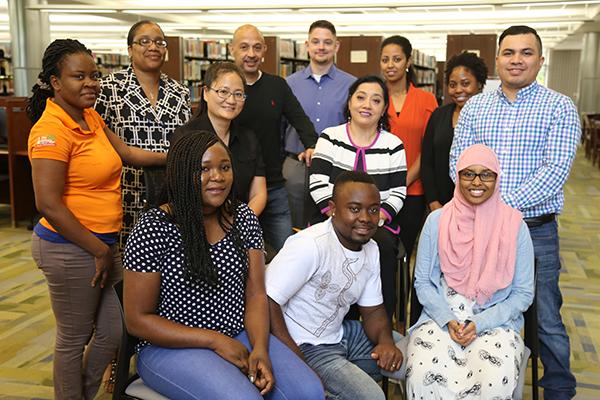 Mathematics Faculty Member Delia Samuel founded the event, which was attended by approximately 75 people. Samuel, who is from the Caribbean, knows from her own experience how lonely the holiday can feel for international students.

Samuel recognized that an annual dinner for international students would be a great fit for Century College, as the college espouses student empowerment as a key aspect of their mission.

“I know how welcoming Century College is,” said Samuel. “We strive to empower students to be the best that they can be. We can do that when they feel connected to us, when they feel at home.

The dinner featured a number of guest speakers, including President Angelia Millender and Faculty Member Dr. David Mekala, who is also the Head of the International Students Association. They echoed Century College’s commitment to its international students, and how valuable they are to the Century College community.

How a New Tradition Came to Be

When Samuel arrived to the United States in 2003 from St. Lucia, she remembers how disconnected she felt from her new community – particularly during Thanksgiving time.

“Every time I’d hear how excited people were to go their parents’ homes during Thanksgiving, it would break my heart that I didn’t have family to share it with,” said Samuel.

Samuel was so enthusiastic that she was prepared to pay for the event out of her own pocket. But when she brought the idea to the Multicultural Center, they loved it, and spoke to on the administration, who agreed to sponsor the event.

The first dinner proved to be a great experience for international students. Many expressed that they had never felt more connected to their community.

“Students felt like they had family here at Century College,” said Samuel. “They were happy, and couldn’t wait for the next year.”

What the International Community Means to Century College

Being away from home is not easy. Samuel acknowledges, though, that the holidays are a particularly difficult time for international students.

“In this era, people feel so divided,” said Samuel. “This dinner is a prime opportunity to show international students they belong.”

This is why Samuel decided this year to give students the opportunity to express their cultures. Students were invited to welcome each other in their own languages, and many came wearing clothing native to their homelands. For Century College, this was not only an event to support the international community, buy an opportunity to celebrate diversity.

“We are all different, and we are all important,” said Samuel. “There are a lot of things the international community brings to us that we can learn from. They make our institution stronger.”

A Commitment to Student Success

Century College’s commitment to international students is more than recognition of their value to the college; it’s also reflective of their overall commitment to student success.

For international students to succeed, Century College recognizes that it is important for students to feel that they are welcome. To do that, the college needs to show students they are interested in who they are.

President Millender once shared a story of when met an international student who was on the West Campus trying to get to the East Campus. She led the student in the right direction, asked the student about himself and what he was doing at Century College, and where he wanted to go. Later in the conversation, the student asked: “so, what do you do here?”

Samuel believes this story reflects the overall culture of Century College, where students are the top priority. This commitment to students permeates her teaching philosophy.

“We as faculty all make sure to welcome and show interest in each and every one of our students,” said Samuel. “If I haven’t seen them in class for a while, I’ll pick up the phone and ask them how they are doing, and if there’s any way I can help,” said Samuel. “That is how you make them feel they belong.”