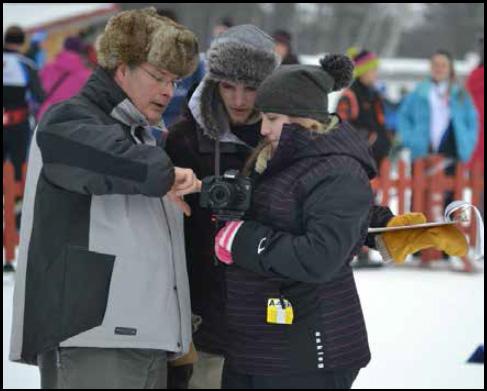 When Filmmaking and Video Production instructor Mike Eddy talks about his teaching philosophy, he turns to football.

“I heard a football coach describe his job as ‘putting the players in the right position,’” said Eddy. “The players still had to execute the block or tackle, but the coach arranged them in the right place on the field to be successful.”

For positioning his students to succeed over the past 10 years, Eddy was presented with the Exemplary Educator Award by Century College, and was one of three Century College faculty named as an Outstanding Educator by the Minnesota State Board of Trustees.

“This dynamic instructor excels at creating a relevant learning environment where students apply their learning, as well as receive conducive and supportive feedback,” writes the Board of Trustees.

The Filmmaking and Video Production Degree program, a component of Century College’s Visual Communications Technologies (VCT) Department, is career focused. Likewise, Mike Eddy doesn’t see the classroom as a classroom – he treats it like the workplace.

“I say that my students should imagine our classroom as a business, and I am their boss,” said Eddy. “They are challenged to produce well-done, accomplished pieces that can be used in their portfolios when they apply for jobs.”

To Eddy, the key to providing the best education is getting students out of the classroom and involving them in real-world filmmaking projects using industry-standard equipment.

“It’s a real client with a real deadline,” says Eddy, “so that gives students just the right amount of pressure to do good work, but also gives them freedom to learn by trial and error.”

Eddy’s Filmmaking and Video Production students have been involved with projects for clients such as the MN State Patrol, the Minnesota Zoo, 3M, the Super Bowl Host Committee, the Paralympic World Championships, and the Century College Marketing Department.

When students work with clients, they’re not only gaining real-world experience – they’re making real-world connections. This is Eddy’s primary goal.

By staying involved in the community, Eddy seeks to create opportunities for internships and employment after graduation.

“I try to be visible within the community and the film production industry in the Twin Cities,” said Eddy. “We’re always looking for connections for students. By doing real client projects, it gets the word out that Century College students are ready to work.”

Ryan Corcoran, a former Century College film student, who now runs Modern Image Film & Video Productions, knows firsthand how involved Eddy is with the community. As a member of the VCT Advisory Committee at Century College for 11 years, Corcoran has a close working relationship with Eddy.

“To be teaching in the industry, you really have to stay on top of this technology and on top of the trends,” said Corcoran. “I think Mike has done a wonderful job of doing that by keeping in touch of people who are out there working, getting involved with the conventions, reading the publications out there, and being in touch with his students and what they’re passionate about.”

After 30 years in the ever-changing video production industry, it’s safe to say that Eddy isn’t a teacher who rests on his laurels.

“He’s never complacent. He’s not just sitting back and teaching the same old things over and over again,” says Corcoran. “He’s definitely trying to give these students the most cutting-edge education possible.”

Eddy’s passionate approach has paid dividends for his students. Most students go on to work for smaller production companies who are impressed by the portfolios they have built at Century College. Some students, such as Cole Meyer, have begun their own businesses.

Meyer, an independent filmmaker, is just one example of a student who Eddy has put in the position to succeed.

“If it hadn't been for Mike's tutelage, fun environment, easygoing approach and push for students to succeed, it would not have led me down the path I am on as a filmmaker. I owe him a lot,” said Meyer, who is currently working on his first feature film.

Perhaps more important than Eddy’s connections to the video production industry and current film technology is his connection with his students.

“He’s a wonderful advocate for his students,” said Corcoran. “All these years later, he’s still thinking of me when people are asking about production vendors, still sending clients my way. He’s always looking for opportunities for his students to either get paid in the industry or learn more in the industry.”