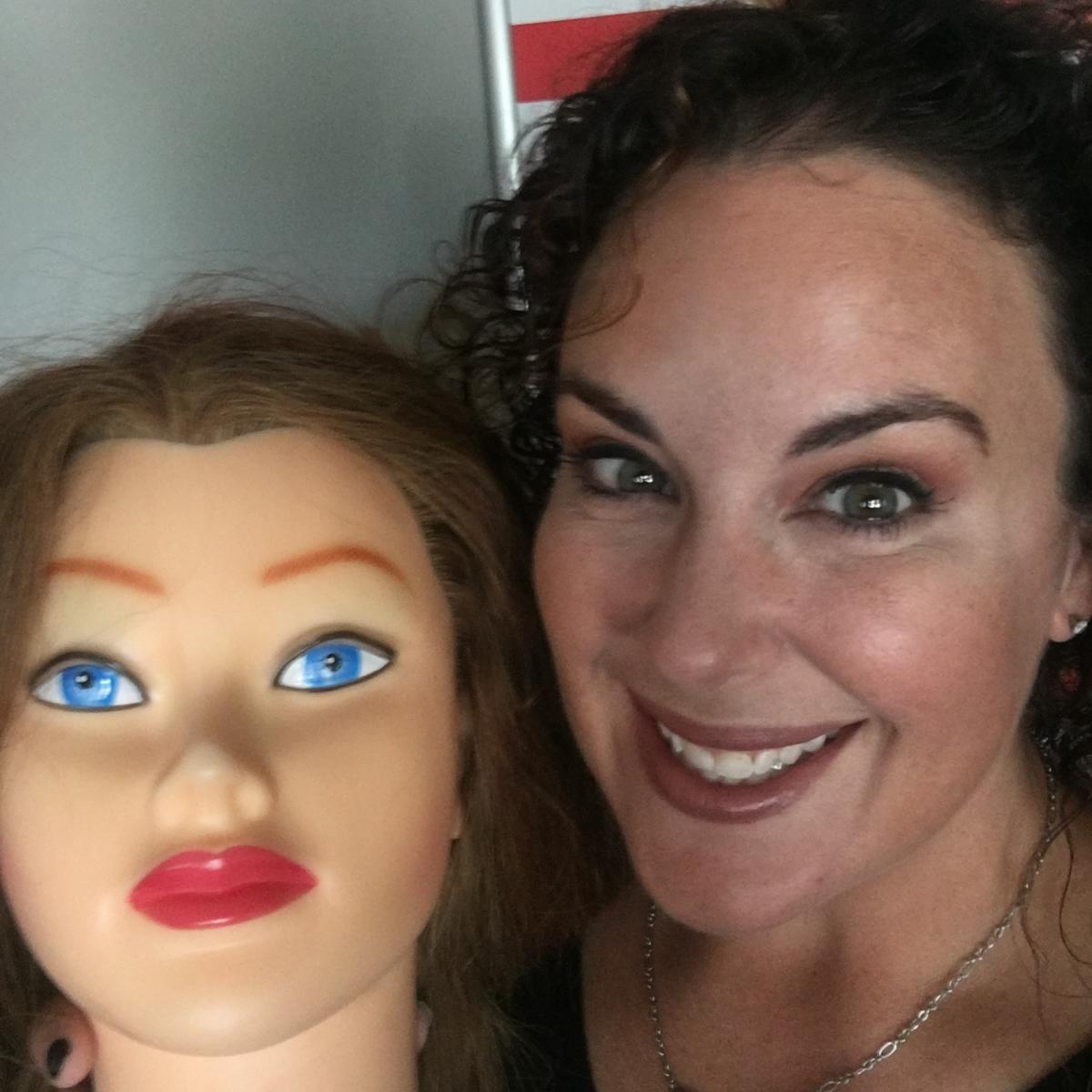 “I always said I tripped, fell, and went sideways into this career,” was Kristin’s description of her entrance into the cosmetology program at Century College. Acting on suggested advice from her boyfriend (now husband), Kristin, cosmetology alumna, ’03, went back to school after previously obtaining a degree in psychology because he saw in her an ability to be really great in this career. Living in western WI, Century was one of the closest, and by far the most affordable cosmetology school option for her.

When Kristin enrolled in the program she was 22, recently liberated from her parent’s medical insurance as a recent college graduate from another institution, and needing to start adulting ASAP. The flexibility of Century’s cosmetology program, which runs 7:45 to 2:15, allowed Kristin to earn her cosmetology license in two years while working full time.

“The program was a lot of fun, it was way different than I thought it was going to be,” she says.  “I thought we were going to stand around and cut hair and play with dolls all day, but there’s so much more to it – you have to learn chemistry, and electricity, and anatomy, in addition to all the different services,” she recalls. “It’s hard to believe there is just this one license that will give you so many options when you get into the real world.”

After completing the 1550 practice hours and earning her license, Kristin found the doors of opportunity and variety in her career start to open. She started as a color artist, moved on to manage a few salons, and became a platform artist for several years (being on stage with a microphone on teaching others how to cut hair). Then she got her instructors license, started substitute teaching at a few local schools, became a Great Clips franchise recruiter, and now is the recruiter for the Twin Cities metro with Great Clips corporate.

Opening Doors for a Lifelong Career

Great Clips has thrown her opportunity after opportunity throughout her 15 years with them. Along the way she has been able to combine her love of teaching with her love of being behind a chair, and doing a little bit of everything in one job. All that variety combined with a changing and flexible schedule means this happy grad never has a dull moment at work.

When asked for advice to future students of the cosmetology program, Kristin says to go into it with a mindset that it IS a customer service oriented job, and to embrace the nights and weekends nature of the work. The upsides include having much better success at building a loyal client base, and having the freedom to easily take care of daytime errands and appointments.

Some of her fondest memories of her time in the cosmetology program include convincing one of the teachers at the time, Karen, sit down for her first pedicure in over 3 years (she loved it, even though she had said “I don’t have time for that nonsense”), and enjoying the crazy Halloween costumes that Thom and fellow classmates would don for the holiday.

Kristin also recalled the moment that haircutting finally clicked for her – it was just two weeks before graduation and she was still struggling with cutting despite repeated encouragement from instructors, and then the lightbulb just went off and she finally got it, and from there on it just made sense to her. In her career now, as a teacher, she makes a point to tell students who struggle to keep at it, saying, “It will come, your lightbulb will come, I promise!” Considering how far she’s come from that moment, Kristin is happy to share with her students that perseverance pays off.

Kristin has kept in contact with her classmates and teachers at Century through the years, and is happy to attend the grand re-opening of student Salon 120, her old stomping grounds, here at Century College. Join Kristin, fellow alumni, and community members on November 8 from noon to 3pm to see all the salon and the cosmetology program has to offer!