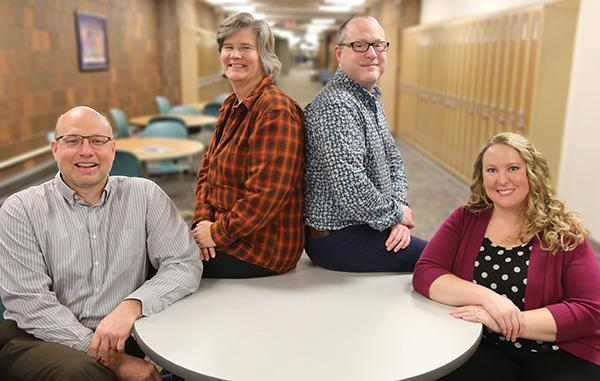 In October, Century College was approved for a three-year grant to fund a Mental Health Awareness Training Program.

From a large pool of applicants, Century College was one of two sites in Minnesota and one of 150 in the country selected to receive the grant, awarded by the U.S. Department of Health and Human Services.

“People are more willing to talk about mental health now, but they still don’t know how to get help for themselves and others,” said Breyer-Peterson. “This program will teach people a step-by-step approach to identify mental health disorders, intervene, and connect individuals to the right resources.”

The program focuses on three groups who experience or are at risk for mental health disorders: students (particularly students of color, low-income students, and LGBTQ students), veterans, and first responders. Century College has the largest student veteran population of any college in Minnesota, and graduates many first responders.

At least 66 training sessions will be administered to approximately 1,500 people in the community, including Century College employees, student leaders, individuals who serve veterans, and first responders and their families.

A Great Fit for Century College

The grant solicitation was first discovered by Mary Vukelich, a Criminal Justice Instructor at Century College. She has been an active member of the National Alliance on Mental Illness for over 20 years, and is a NAMI-certified instructor for Mental Health First Aid training.

“It seemed like a great fit for our campus, because we have a strong community of people committed to students’ mental health,” said Vukelich.

Vukelich brought the grant to the attention of Don Long, the Director of Resource Development at Century College. Long notes that Century College does not often respond to opportunities from the U.S. Department of Health and Human Services because they’re typically not aligned with the mission of the college. This grant, though, was different.

“In this case, they specifically call out colleges as a good setting to conduct one of these projects,” said Long. “That’s pretty unique. They want to help us identify mental health needs, because they want to help us serve our students.”

To get the grant proposal up and running, Long organized a team to help plan a proposal and a project. This included Breyer-Peterson, Vukelich, and EMS Instructor Chris Caulkins. Vukelich and Caulkins will serve as instructors for the program.

What’s in the First Aid Kit

To Breyer-Peterson, a Licensed Psychologist who took special interest in veterans and first responders, the Mental Health First Aid Training Program does indeed provide participants with a set of skills that function much like a first aid kit.

“Just like when someone injures themselves, you take the necessary first aid steps, and then bring them to the appropriate people,” said Breyer-Peterson. “These people are going to serve as a temporary Band-Aid, a role psychologists, physicians, and psychiatrists couldn’t possibly fill.”

The Mental Health First Aid class will give participants detailed knowledge about mental health disorders, including symptoms of depression and anxiety, as well as warning signs for substance abuse.

A key emphasis is on how to talk to people who are experiencing a mental health crisis, how to ask people if they’re okay, and what to do if someone expresses thoughts of suicide.

How the Grant will make a Difference

The most exciting aspect of the grant to Breyer-Peterson is the large number of people the program will affect – both directly and indirectly.

“Mental health first-aiders can teach their new skills to people in the community who can, in turn, spread the knowledge to reach even more people,” said Breyer-Peterson. “The net just gets wider and wider.”

The grant will also fund an expanded referral network for Century College, allowing students more options for culturally-matched therapy, which will be paid for by the grant in some cases. The college is also looking into purchasing online tools that would allow students to obtain mental health assistance online.

Providing these tools is critical to the success of students, which often hinges on mental health.  Reaching out to the community to serve veterans and first responders is likewise paramount to the success of the Northeast Metro area.

“This program helps build bridges in the community,” said Long. “As a community college, that’s clearly part of our purpose and our mission.”