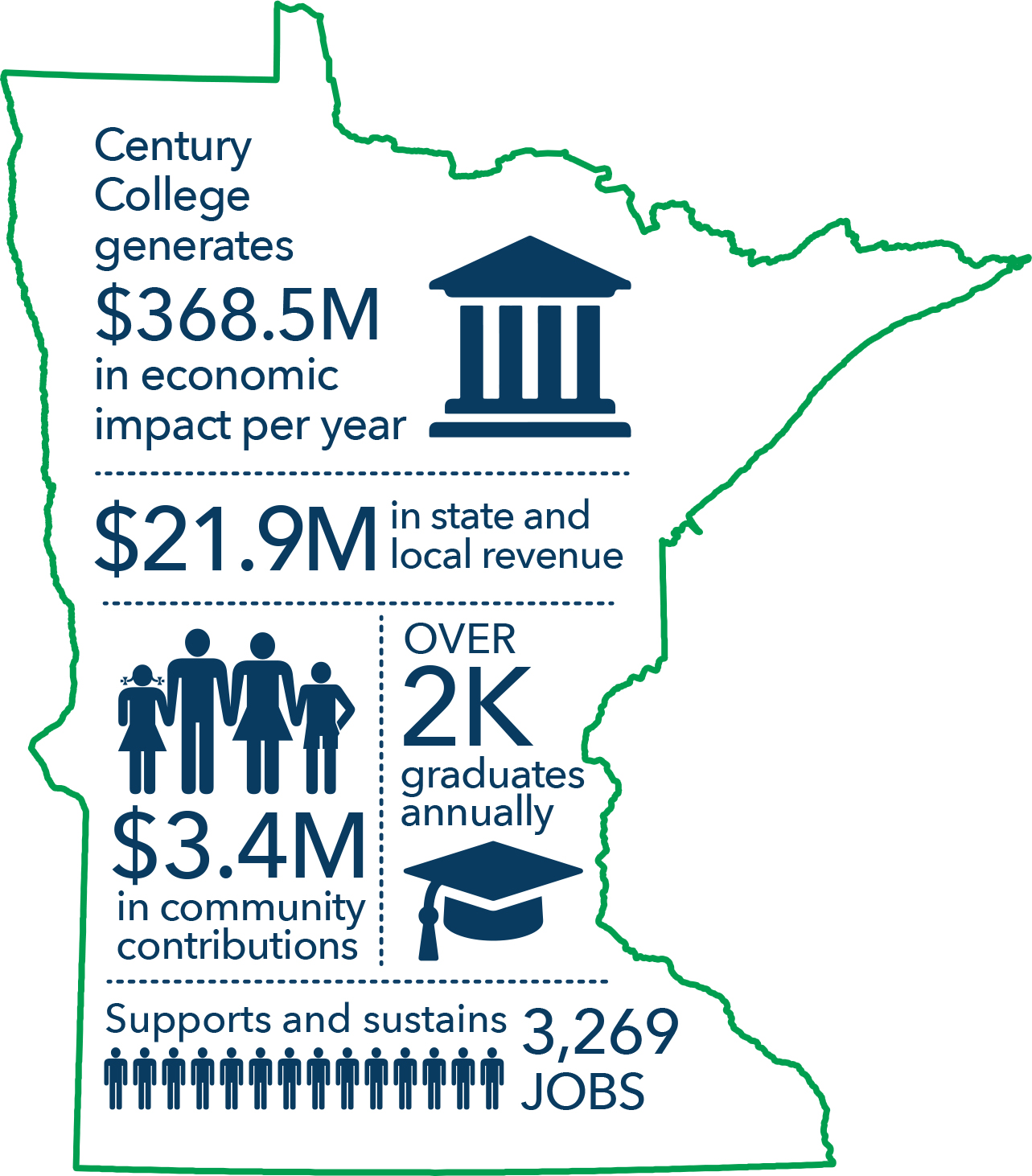 White Bear Lake, Minn., Nov. 13, 2018 – Minnesota State, the system of 30 state colleges and seven state universities, today released the results of a study that estimates the contribution of Century College to the regional economy to be $368.5 million and 3,269 jobs.

“At Century College, student success is our top priority. But the college also plays a vital role in both the state and the local economies. Our operations and the economic activity generated by our faculty, staff, and students touch virtually every corner of the region,” said President Angelia Millender.

The study was commissioned by Minnesota State and was conducted by Parker Philips, a nationally recognized consulting firm specializing in economic impact analysis.

“An economic contribution analysis is an objective way to measure the significance of an organization in the regional economy; it is a tool that policy makers can use to inform their decisions,” said Nichole Parker, a principal partner at Parker Philips. “Century College clearly is a major contributor to the regional economy.”

In the analysis, the study considered the direct spending on operations, pay, benefits, and capital projects by Century College and the estimated increase in demand for goods and services in industry sectors that supply or support the college. The study also measured the effect of student spending and the induced effect of increased household income.

According to the study, a key result of this activity is that Century College supports and sustains 3,269 jobs including direct employment by the college, as well as indirect and induced jobs created by supply and equipment vendors, contractors, and laborers for the construction and renovation of facilities, and jobs created in the community at hotels, restaurants, and retail stores in support of the college’s faculty, staff, students, and visitors.

The study also calculated tax revenues generated by this level of economic activity, including sales, property, personal income, and corporate income taxes. The study concluded that Century College generates about $21.9 million in tax revenues for state and local government.

The study further estimated the value of the increase in productivity that the degrees awarded by Century College yield throughout the careers of the graduates. Assuming a 40-year work life, the education received by these graduates will yield additional state income of $5.4 billion (future value, discounted and adjusted to account for such factors as foregone income while attending school and outmigration).

“Century College makes a long-term contribution to the regional economy with every graduating class because the productivity improvements from higher education last for the worker’s entire career,” said President Millender.

Statewide, all Minnesota State operations, including all seven state universities and 30 community and technical colleges, plus the spending of its faculty, staff, and students, had a total statewide economic contribution of $8.0 billion. This activity generated an estimated 67,717 jobs in the state.

The economic contribution report for Century College is available at MinnState.edu/IMPACT and century.edu/EconomicContribution.

Century College is a two-year community and technical college located in White Bear Lake, Minnesota offering 141 degrees, diplomas, and certificates. As one of the largest two-year colleges in Minnesota, Century College serves over 21,000 credit and non-credit students every year.

Minnesota State includes 30 community and technical colleges and seven state universities serving approximately 375,000 students. It is the fourth-largest system of two-year colleges and four-year universities in the United States.