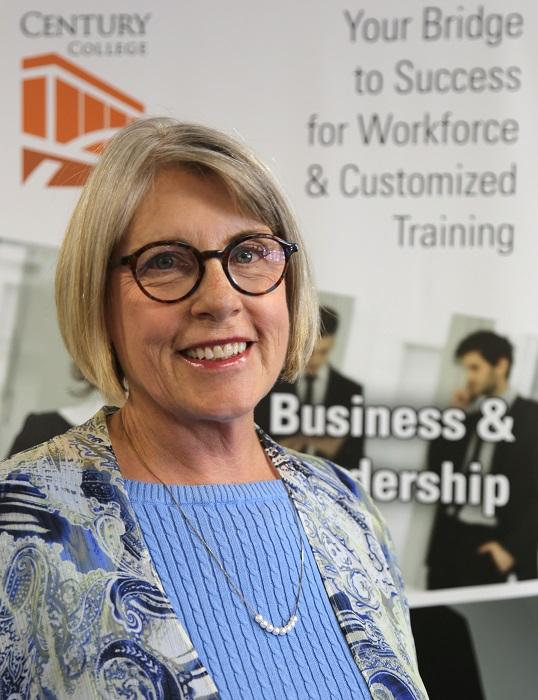 When Kate Christopher, President of the Century College Foundation Board of Directors, talks about the economic reality facing Minnesota, she doesn’t mince words.

“We like to think we’re all rolling in dough up here,” says Christopher, “but that’s not the truth. Minnesota has many people suffering from poverty and homelessness and, I believe, the best way to combat this is through education.

“If you have someone who’s economically struggling,” says Christopher, “rather than giving them things, we want them to get an education, so they have a way to earn a living wage.”

Kate earned an MA in in vocational education and counseling in 1975 and has been committed to education ever since. Driven by her desire to help economically disadvantaged students earn a college degree, Christopher founded the Unitarian Universalist Empowerment Scholarship in 2010, eight months after joining the Century College Foundation board of directors. The scholarship awards $600 a semester to a college student who is overcoming obstacles on their path toward self-sufficiency.

“Love is the Spirit of this Church, and Service is its Law”

“Love is the spirit of this church, and service is its law. This is our great covenant: to dwell together in peace, to seek the truth in love, and to help one another.”

Christopher’s church lives by these words. A collection is held every other Sunday that goes to social action, including food shelves, youth shelters, and Solid Ground, which provides housing for homeless individuals. When Christopher initiated the Empowerment Scholarship, she was able to employ the fundraising system already in place to get the scholarship up and running.

The Empowerment Scholarship is about Changing the Dynamic

The Empowerment Scholarship is offered for students working toward a two-year degree and part-time students. Initially, the scholarship’s focus was single mothers.

“Single moms often can’t go to school full-time. In order to support this population with children, we often focus on part-time students,” says Christopher, “the best way to provide help with children is to facilitate the education of their parents. When you do that, you change the whole family dynamic.”

The scholarship helps students with some expenses not always covered by student loans, such as books and course materials. But what she considers equally important is the confidence the scholarship inspires in recipients.

“For people living in the crisis of poverty, there are so many barriers,” says Christopher, “offering a thousand dollars over a year is not going to radically change those barriers. But it’s not only about the thousand dollars. It’s what it means to the individual. It’s that a student can say, ‘somebody chose me; somebody believes in me.’ That’s where you make a difference.”

Occasionally, a scholarship recipient will need to put their education on hold. For people living in poverty – especially single mothers – it can be challenging to balance life and school. The important part for Christopher is not how long it takes a student to complete college, but that they continue to strive for an education.

Making a Push Toward Endowment

To make the scholarship permanent, Christopher is counting on Century’s help. In honor of Century College’s 50th anniversary, the Century College Foundation has agreed to match up to $2,500 in donations toward endowed scholarships by non-profits for the next two years. This provides great motivation for her church community.

The extra motivation seems to have paid off. Last fall, Christopher’s church collected $2,800.

For Christopher, endowment is just the first step. After getting the scholarship endowed, she hopes that it will not only continue, but grow. The need for student funding, Christopher says, is great. Last year, the scholarship had over 132 applicants.

Christopher also hopes the example set by her church will be followed by other churches. By inspiring others to become involved in supporting students at Century, she believes the scholarship can have a profound impact. What if all the churches in the Northeast area served by Century College created scholarships?

“Wouldn’t that be cool?” asks Christopher.