Century College Goes Beyond the Call of Duty for Military Veterans 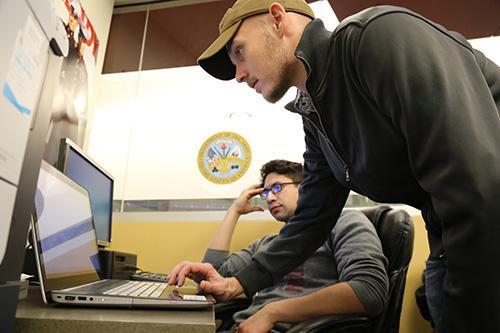 When it comes to assisting military veterans, Century College stands a cut above the rest. In Minnesota, Century College serves the most military-connected students out of all two-year colleges, and the fourth-most overall out of any school in the state.

But what makes Century College a great school for veterans goes beyond the raw data, according to Veteran Services Coordinator Shannon Kasperson. The real story, Kasperson says, is behind Century College’s TRIO program.

TRIO is a collection of seven grant-funded programs that assist low-income and first-generation students, three of which are offered at Century College. These programs include Student Support Services, Educational Talent Search, and Upward Bound.

One grant was provided by the federal government to create a branch of Student Support Services focused exclusively on veterans that have served on active duty. Century College was the only school in Minnesota to receive this grant, and one of 14 in the country.

The grant allowed Century College to hire a full Veteran Services staff, including Kasperson, a certifying official, an academic advisor, a math tutor, and a writing tutor.

“This is pretty rare. Most schools just have a single staff member to help veterans process their benefits,” said Kasperson. “That’s just the beginning of what we do. We have five people dedicated to helping veterans succeed in college.”

To retain the TRIO grant, there are three objectives that Veterans Services must accomplish each year – all of which are set above Century College’s average numbers.

In each of the three years Century College has been administered the grant, Veteran Services has exceeded all of these benchmarks. However, Kasperson isn’t focused on the numbers.

For veterans, trust doesn’t always come easily. According to veteran and Student Support Services participant Norman, who preferred to be called only by his last name, serving in military conditions leads many veterans to have a jaded outlook on life.

“A lot of us have a mindset that, sure, it would be nice if we came in here and everything worked out as planned – but it won’t,” said Norman.

That’s why Veteran Services’ biggest focus is building trust in the program. Kasperson makes sure to listen to what participants want and do whatever she can to help them achieve their goals.

Building trust in Veteran Services begins with benefits. The hierarchical structure of the military can make obtaining benefits a complicated process. Kasperson, in contrast, tries to make it as easy as possible.

“I get a lot of feedback from students that say this is the easiest working with their military benefits has ever been for them,” said Kasperson. “A lot of schools simply ask students what their benefits are, but students don’t usually know what their benefits are. We anticipate the questions they don’t know to ask so we can find out what they are eligible for.”

Beyond technical assistance in guiding veterans toward their degrees and navigating benefits, Veteran Services also dedicates time to personal development.

“Helping veterans reintegrate is a big part of what we do. We’re not attempting to erase their military past, but helping them move forward,” said Kasperson. “We have many talks about life and how they can use what they gained, good or bad, to grow as individuals.”

The first step for Kasperson is encouraging veterans to seek assistance when they need it. According to Norman, soldiers are often reluctant to do so.

“There’s a mentality for soldiers that if you’re asking for help, you’re not up to the challenge, and that’s something you shouldn’t admit,” said Norman.

Even so, Kasperson claims it’s not uncommon for students to come to Veteran Services with emotions running high. She tells these students that asking for help is a sign of strength, not weakness.

“It can be hard for students to accept a new definition of strength, because it goes against everything they were taught in the military,” said Kasperson. “But I tell them that they have to train themselves to think differently if they want to grow as students and as people.”

Though changing and moving forward is difficult, student veterans at Century College are certainly up to the challenge.