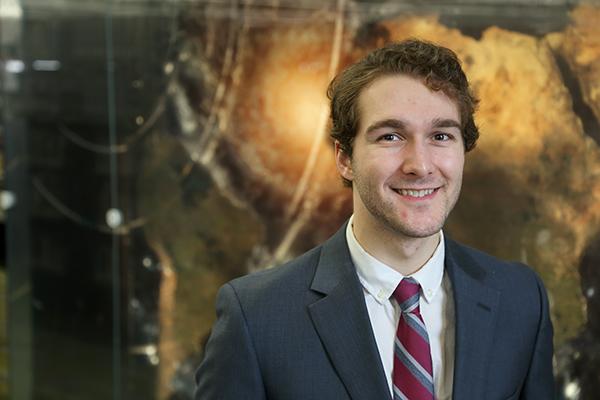 Perhaps the most unfortunate misconception about two-year colleges is that they represent a second-rate education.

If you ask Century College graduate Mitchell LeGrand, that couldn't be further from the truth.

“Some people look down on community colleges as starter schools or training wheels, but Century College provided me with a great education and amazing opportunities,” said LeGrand, who graduated from the University of Minnesota last December.

When LeGrand says ‘starter school,’ he is talking about the perception that a two-year college is little more than a stop-gap on the way to a four-year college or university.

Striving for a Brighter Future

Not bad for someone who was getting C’s and D’s throughout most of high school.

The 2008 recession hit his family hard, and without college degrees, his parents struggled to find consistent employment. LeGrand decided to work full-time to help make ends meet. With a shortage of time and energy, as well as a spotty internet connection, he had difficulty completing his schoolwork.

All of that changed during LeGrand’s senior year. His parents found steady jobs, which meant he could spend less time at work and more time on school. Though he became a straight-A student, LeGrand still thought college wasn’t an option.

“When I looked at colleges, I thought they’d never accept me. And even if they did, I wouldn’t be able to afford it,” said LeGrand.

At the encouragement of his academic counselor, LeGrand had applied for a scholarship through the STRIVE program, supported by the White Bear Rotary Club. He was shocked when he won the largest STRIVE scholarship, paying a full year’s tuition at Century College.

“I got in the car on the way home, and was yelling out the window, ‘Yeah! I’m going to college!’” said LeGrand.

LeGrand has long been dedicated to helping others. He has started six different organizations dedicated to serving the community, tutored hundreds of students, and continues to volunteer regularly. He has arranged fundraisers, awareness events, and campaigns to fight for environmental causes, affordable education, and social justice. The University of Minnesota recognized LeGrand as the winner of the Sullivan Ballou Award, given to an undergraduate student who “devotes heartfelt energy to promote human rights.”

While his community work certainly has made the Twin Cities metro a better place, he had the opportunity to make a global impact when he decided to delay his final semester and partake in a study-abroad program in Northern Ireland.

The program, curated by HECUA, allows students to study the legacy of violent conflict in the region and engage with efforts to facilitate sustainable peace through community internships.

During his time there, LeGrand was placed at the Northwest Cultural partnership, a cultural organization dedicated to community development in Northern Ireland. It focuses on regions affected by sectarian tension between Catholic-Nationalist and Protestant-Unionist groups.

“It was the most life-changing internship ever,” said LeGrand. “It reaffirmed my love for doing community work. I know the kinds of things I did over there are how I will help the world.”

Finding His Way at Century College

LeGrand’s experience in Ireland wouldn’t have been possible without Century College. The internship costed nearly $25,000 after flights, visas, and living arrangements, according to LeGrand. But thanks to scholarships, financial aid, and the money he saved by going to Century College, LeGrand was able to reduce the price of the trip to a fifth before taking out a loan.

“In a way, I made money by going to Century College,” said LeGrand. “I graduated with almost 10,000 dollars in leftover scholarship money.”

Affordability wasn’t the only thing that made his Century College education valuable.

“Century College gave me a lot of hard skills,” said LeGrand. “I studied communications there, which really set me apart from other people at the University of Minnesota.”

Reconsidering some of the misconceptions about community colleges, perhaps Century College is indeed a “starter school.” For Mitchell LeGrand, Century College was the start of an incredible future.

“At Century College, I was able to take the time I needed to find my way,” said LeGrand.