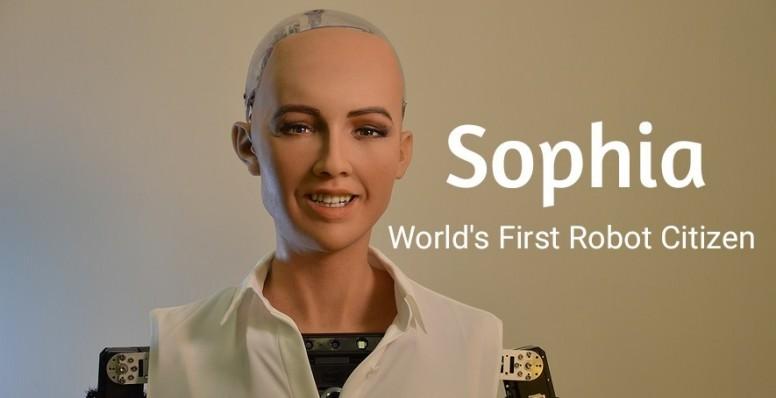 On Tuesday, February 27, Century College and the White Bear Area Chamber of Commerce, in conjunction with Hanson Robotics, LTD, hosted a special luncheon meeting featuring Sophia, the latest and most advanced humanoid robot.

Following welcoming remarks by Tom Snell, White Bear Chamber, Angelia Millender, Century College President, and Michael Berndt, VP of Academic Affairs, Sophia was presented to the group, and expressed her thanks for being invited to White Bear Lake, the "epicenter of the Twin Cities."   Sophia has a life-like appearance, and can recognize faces and human speech, make eye contact, and facial expressions, and is capable of giving speeches.

Bob Schlichte, Chamber Board member, then interviewed Sophia, and she discussed the implications of using Artificial Intelligence (AI) in fields such as healthcare, where an aging population can be aided by robots via in-home care.  Robots can provide health care at a fraction of the cost, she emphasized.

Sophia also expressed her wish to be a champion of human rights, and she has been granted citizenship by the Kingdom of Saudi Arabia. The United Nations Development Program (UNDP) named Sophia the first UN Innovation Champion.  She will work with the UNDP to promote sustainable development and safeguard human rights and equality.

Following the presentation, guests were invited to tour Century College's Digital Fabrication Laboratory to learn more about the College's role in building prosthetics, 3-D printing processes, and their importance in the field of Artificial Intelligence.  Scott Simonson, Director of the Century College Fab Lab, showed visitors how the lab serves students who are going into STEM (Science, Technology, Engineering and Mathematics) fields.