Inside the Fab Lab: The Fab Lab Launches into the Future with 3-D Bioprinting 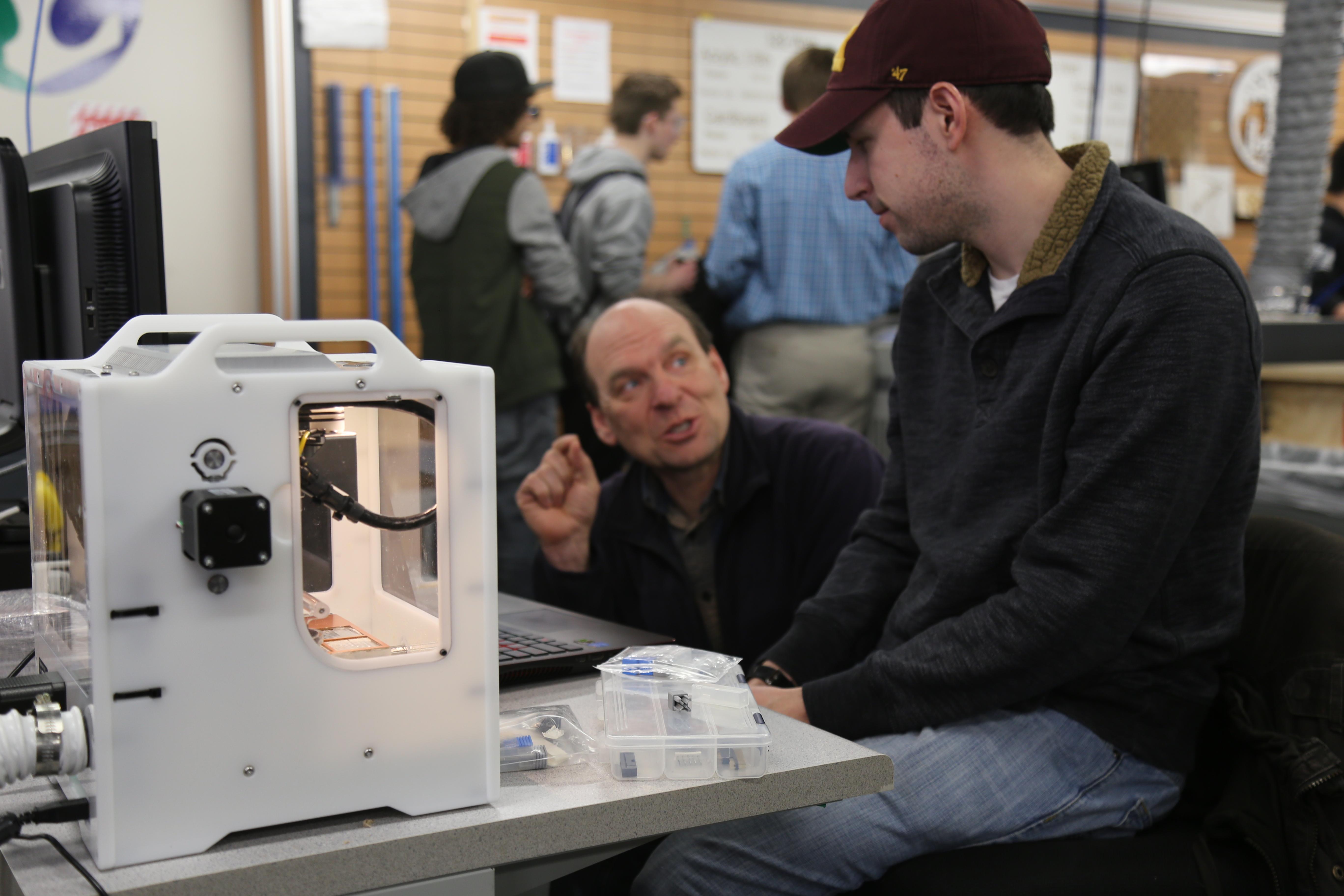 The future of medicine has arrived, and the Century College Fab Lab is playing a significant role.

Bioprinting, a 3-D printing process that uses human cells to create living tissue, is expected to revolutionize the field of medicine. This emerging field is a subdivision of Biofabrication, the production of organs and tissue by an automated process.

When the University of Minnesota, a leading institution in the biofabrication/bioprinting field, began developing a bio-printing program, they looked to collaborate with a 2-year college. University of Minnesota Professor of Pediatrics Dr. Angela Panoskaltsis-Mortari, who is the director of the 3D Bioprinting facility, considered Century College an ideal educational partner.

“With the Fab Lab and Center for 3-D Printing, Century College already has much of the infrastructure and curriculum that would be relevant to this field,” said Dr. Panoskaltsis-Mortari.

“This represents Century College’s investment in a whole new technology and a whole new field,” said Simenson. “Plus, how often does a two-year college get to work directly with the University of Minnesota? It’s remarkable.”

In the proposed program, students would earn a certificate in biofabrication/bioprinting after completing sixteen credits. The bioprinting certificate, when developed, would be the first in the Twin Cities area.

The University of Minnesota received an education grant from the Advanced Regenerative Manufacturing Institute (ARMI) of the Department of Defense to fund the creation of the bioprinting curriculum.

Though bioprinting is primarily relegated to academic research at this stage in its development, the industry is evolving rapidly along with the technology.

The developments in the bioprinting industry were on full display during the bioprinting symposium Century College held on April 27. The symposium included discussion on the importance of bioprinting to the Twin Cities region and the workforce skills needed to support careers in biofabrication.

According to keynote speaker Dr. Panoskaltsis-Mortari, it’s only a matter of time before the industry becomes commercially viable.

“The bioprinting industry is poised to come out of the university lab setting and go to the manufacturing floor,” said Dr. Panoskaltsis-Mortari. “There are many industries and companies that are interested in getting involved in it.”

This includes the healthcare industry and, in particular, medical device manufacturers, where technicians in the bioprinting field are in increasingly high demand. For students looking to work in the medical device industry, there’s no better place than Minnesota.

The Twin Cities metropolitan area, known as “Medical Alley,” has the highest density of medical device jobs in the United States by far, with 27,462. To put that figure in perspective, New York has the second-most jobs in the medical device industry with 17,828 (1).

For Century College, bioprinting is an opportunity for students from Biology and Additive Digital Manufacturing to collaborate and become fluent in each other’s fields.

“This partnership is exciting because it is truly interdisciplinary,” said Lori Thrun, Biology faculty member at Century College. “Once students from biology and ADM learn each other’s scientific ‘language’ in foundation courses, the two groups will exchange ideas to create novel approaches to current problems in biotechnology.”

Bioprinting is just one example of how the Fab Lab integrates Science, Technology, Engineering, Art, and Math (STEAM). In a high-tech economy – especially in the medical device industry – students that possess skills in all aspects of STEAM are highly sought after, particularly in the digital manufacturing industry.

“The Fab Lab represents a new educational model,” said Simenson. “It represents an opportunity for students to get engaged in a field where they can work in very diverse teams, which is exactly what’s going on in business and industry.”

A Leader in Innovation

Beyond beginning to develop a bioprinting program, Century College has already invested in the future by ordering a Cellink Bioprinter, which will provide students the opportunity to work with the same technology that’s used to repair heart valves and print new organs. The Cellink bioprinter was discounted at 15 percent specifically for Century College.

“They wanted us to have this machine,” said Simenson. “They recognize us as a leader in innovation.”

The Fab Lab – the fourth in the United States – has been a hub of innovation since its inception, often capitalizing on brand new technology. When Scott Simenson founded the Center for 3-D printing eight years ago, he recognized the potential of the 3-D printing industry.

But even Simenson is surprised at how 3-D printing has evolved.

“I felt that 3-D printing was going to be a game changer for manufacturing,” said Simenson. “I had no idea we would be utilizing the same technology in the biomedical field.”

Dr. Panoskaltsis-Mortari, for her part, is looking forward to exploring this new field of manufacturing with Century College.

“It’s exciting to work together with faculty from the University of Minnesota and Century College to craft a program customized to this field that is the most useful for our students,” said Dr. Panoskaltsis-Mortari.