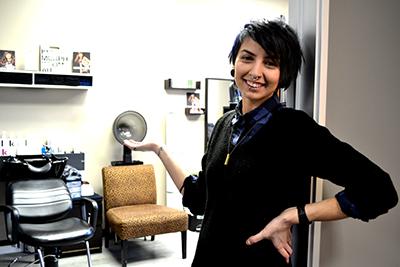 When Century College alum Amberlee Rehbein was looking for a Cosmetology school, she needed flexibility. Like many of her classmates, she was working, on her own for the first time, and wanted to continue her education. "I decided to enroll in Century's Cosmetology program, going only 4 days a week. Most other cosmetology schools require that you attend on a strict schedule. Century provided part-time options, which was perfect for my work schedule. In addition, we were out of class by 3. In most schools, you wouldn’t get done until 5, when most work night shifts have already started," Amberlee recalls.

Getting involved in SkillsUSA, a leadership organization, also enhanced Amberlee's educational experience. Century College Cosmetology faculty member Thom Costa encouraged her to go to a leadership training weekend in St. Cloud. "After an amazing weekend of fun, teamwork, dedication and encouragement, I felt ready to shift gears and make my life what I wanted it to be," Amberlee noted.

In addition, encouraged by her teachers and peers, Amberlee became SkillsUSA's Treasurer for the Minnesota State officer team the following year, and began to realize her potential. "By the end of that year as a state officer, I had accomplished so much--speaking to over 5,000 people at our SkillsUSA state conference, plus competing at the SkillsUSA State and Nationals conference," Amberlee said. "I was fortunate enough to take home first place at state for the Cosmetology category, and second at nationals!"

"Amberlee was the first student to bring a medal in cosmetology from the national SkillsUSA convention to the state of Minnesota in over 40 years. When her name was called, we all jumped for joy." Thom Costa adds, "The faculty knew the first day that Amberlee walked into our school she was going to be a rock star in the industry.  We watched her grow into the confident professional that she is today."

After graduation, she started her Cosmetology career at the Minneapolis salon Moxie. "They [Moxie's staff] provided a great education that helped me develop my skills and knowledge of the hair world. Six years later, I decided to branch off and rent a chair at Hair.e.tic Salon. I just moved to Sola Salon, and will be able to do hair and host my art business.  I have now been a business owner for more than 2 years and will always be striving to learn and do more," Amberlee said.