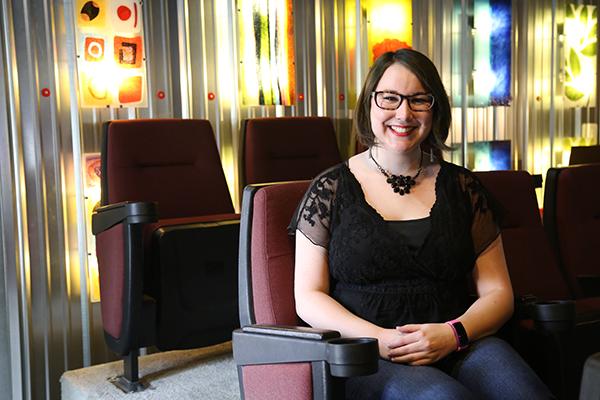 It was a matter of luck meeting preparation and opportunity, when Century College Additive and Digital Manufacturing (ADM) student Callie LeClaire was discussing her job search with a Target co-worker a few months ago.

By chance, a shopper overheard her conversation and recommended that she contact General Pattern Company as they were looking for someone with her qualifications.  Turns out, that shopper was the president of the company.  Soon after, Callie received an email from General Pattern's Human Resources Department about an interview and the rest is history.  Callie got her job as a 3D Printing Specialist, and three weeks later, she and her new boss were on a plane to Detroit to attend the largest 3D printing conference in America.

ADM wasn't the career path she was intending, but it fits her life perfectly.  When she started out at Century College, she had originally planned to go into Food Science, and then transfer to a 4-year university.  Her mom and her sister are both alumni, so she knew the value of a Century College degree.

Callie is a creative person who loves design, and is an experienced jewelry maker.  She soon transferred to Century's Engineering CAD Technology program; however, she discovered that she didn't want to be on the computer all the time.  She loves to design and tinker with her creations.

She had also considered a career in Graphic Design until Century College Fab Lab faculty guided her into the 3D printing program.  She took the "How to Make Anything Class" and loved it, quickly learning how to laser cut & raster a notebook for her class.  After that assignment, she went on to create other items, including wooden purses and jewelry.

As part of her coursework, she collaborated with Gopher Electronics to develop a more efficient way to laser cut spools. She had the benefit of earning credit in class at Century while also consulting with a major corporation.

"The level of professionalism and skill among the Century College instructors is impressive." Callie notes. "My experience working with Gopher Electronics was critical to my education because it was a hands-on, real-world work challenge, and I was able to help find a creative solution."

The Future of 3D Printing

Callie considers herself fortunate to work for General Pattern, a Minnesota company that has been around since 1922.  "Our company is on the forefront of everything--it's nimble and agile.  We're one of the few companies in America to own an HP4200 printer.  And Denny Reiland, the owner of our company, is very supportive of Century College students--we had a tour here for ADM students, so that they could see real-life manufacturing applications and uses for designs.  For example, one of the things we do is build plastic parts for Tesla cars."

Callie sees a bright future in ADM and 3D printing.  "3D printing is not a fad; it will grow 1000% in 10 years, and keep in mind that a large part of industry won't replace plastics, but 3D printing will become another leg of the table.  3D printing will be found in all kinds of fields, from the food industry to jewelry design to clothing manufacturing to aerospace," she observes.  "And Century College's ADM program is preparing students to meet that future."