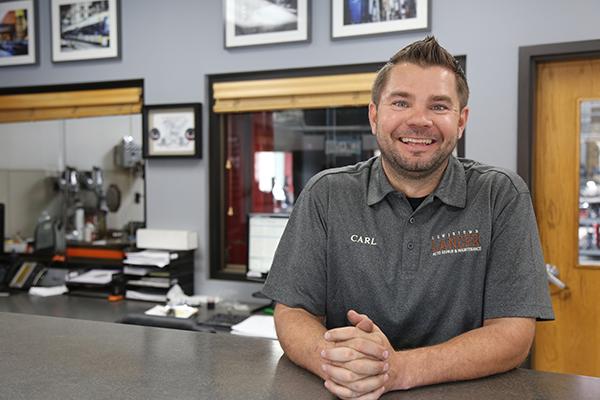 "Cars have always been part of my DNA," says Carl Thomas, Century College alum and owner of Lancer Service in St. Paul. His passion for engines started when he was a child, and he switched out an engine from a mini-bike to a go-kart. He always knew what his path would be, but he wasn't convinced that college was the right choice for him.

Carl's dad started Lancer in 1977, and he knew he would be involved with the business.  He worked summers in the shop when he was a teenager, and learned the business from the ground up.  After high school he decided to attend Century College's Automotive Service Technology program.

"I was on the fence as to whether or not I should go to school, because you can pick up a lot of knowledge in the workplace, but I learned new things from Century College instructors," notes Carl. "The knowledge about subjects like electrical diagnosis was immediately applicable.  When I was done after 2 years, I was youngest in the country with Automotive Service Excellence certification."

Carl bought the business ten years ago when his dad retired, and by his early 20s, he was a shop foreman. He also opened a second business, CJTunes, working on late model GM performance cars.  Carl loves diagnosing cars, and fits into a rare niche--he understands computers and programming and has mechanical aptitude.

"Calibration is communication, and tuning is a specialty field.  Engines, and transmission issues can now be repaired with software adjustments, and it's more user-friendly now than ever," notes Carl.  'However, the technology is always changing.  Five years from now transportation will change exponentially, as we go from traditional vehicles to driver-assisted and fully autonomous vehicles, the auto repair industry and mass transit in general will be turned upside down."

Keeping on Top of Industry Changes

Carl is an advocate of keeping on top of the changes in the industry, where he currently serves as president of the Alliance of Automotive Service Providers  (AASP).  In addition, he gives regular noontime seminars on "protecting your auto investment" to an average of 100-120 people.  He also works with MNCARS and enjoys talking with high school students about careers in the industry where there's currently a technician shortage. "It's a labor-intensive field and requires continuing education, but you can make a lot of money," Carl says.

And for those who need advice about maintaining their cars, he offers this guidance: "Find a good auto shop, where they will teach you about the repair process.  Good shop owners understand that the value is built from a strong customer relationship.  What makes us great is the details.  We document everything we see with your car." says Carl.

He loved working with his Century College instructors, and he gives back by serving on the College's Automotive Service Technology Advisory Committee, working to keep curriculum current.  "My two years at Century College were fantastic," says Carl. "The instructors were great.  Century College had good classes, including two in Business which were really helpful."

In 2014, Carl was named Century College Alumni of the Year, and gave an address at commencement.  "I'm always appreciative that I got an education at Century College. The College accelerated the direction I was going, and it put me on the fast-track to be better," says Carl.