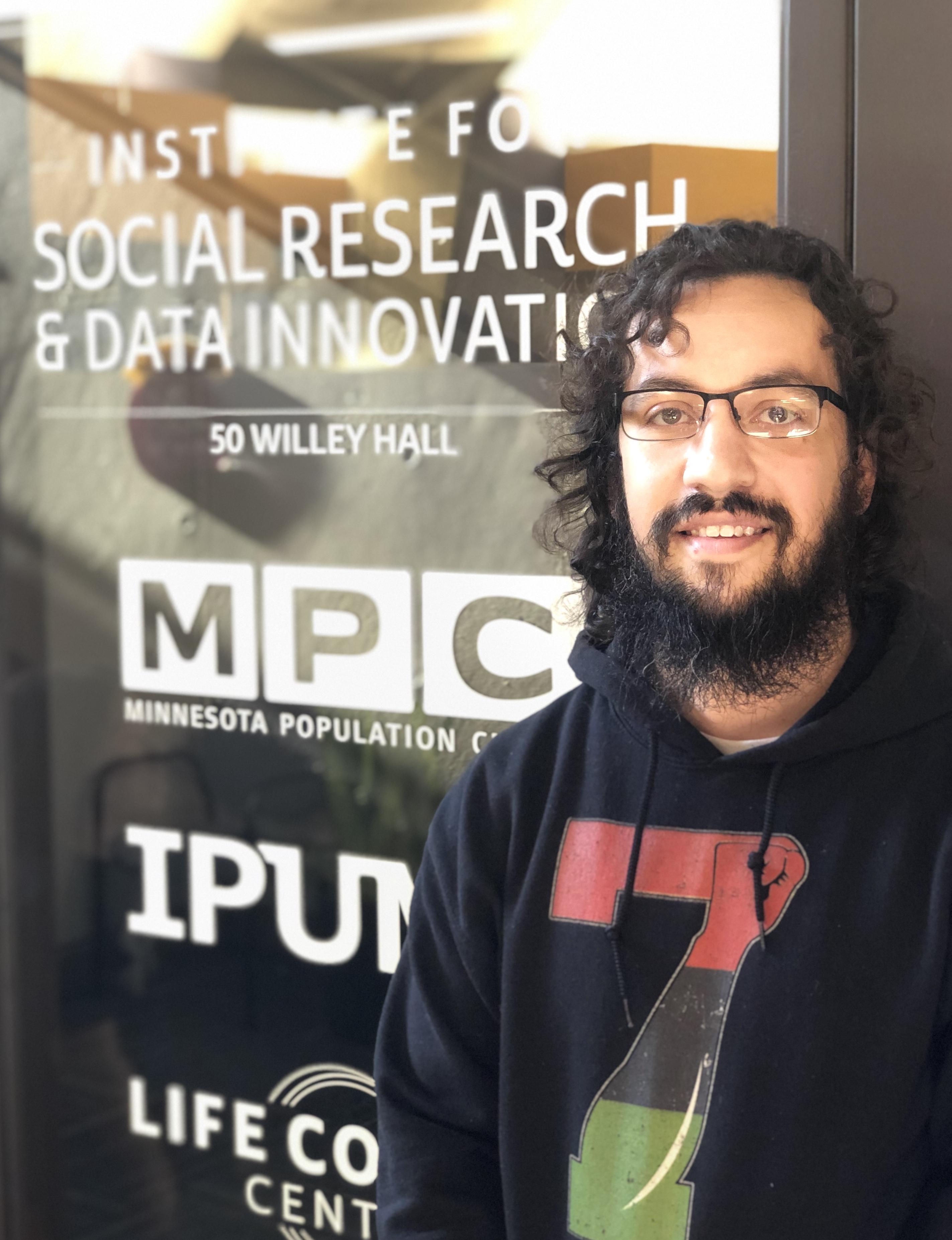 I visited Corey Culver, a third year PhD student in Sociology at the University of Minnesota, in his office at the Minnesota Population Center. We found a quiet conference room where we could chat and his son, Gabriel, could work on his drawing skills (he’s quite good!). In addition to his studies, Corey works as a Graduate Research Assistant here via the U.S. National Institute of Child Health and Human Development Diversity Supplement, a two-year grant that allows him to work on two projects that will ultimately produce two peer reviewed articles that he will be the lead author on.

In this work, Corey uses the American Time Use Survey to look at residential and non-residential fathers’ time use with and without their kids, and how that influences their wellbeing. The American Time Use Survey (ATUS) is a random survey sampling of the current U.S. population that measures the amount of time people spend doing various activities, such as paid work, childcare, volunteering, and socializing.

One of his projects focuses on the summer set back differences for students of color and students in poverty; another focuses on racial differences at all ages, discovering how wellbeing changes over their lifetime based on time spent at work versus leisure; another project looks at parental time spent at extracurricular activities with their kids versus educational activities. He also contributes to other colleagues’ projects as needed, now that he’s gained intimate knowledge of the America Time Use Survey data.

Corey’s diversity supplement also includes mentoring, training, and workshop opportunities with the Population Center that has allowed him to travel domestically and internationally. Though traveling and learning is fun, his favorite thing is researching, presenting his research, and hearing what everyone else in the field is doing – the connections, relationships with other scholars, and circle of feedback amongst their respective research projects allows for constant opportunity for collaboration and evolution of their individual projects.

Corey hopes to use the residential and non-residential father’s time use data to positively influence family law and policies, such as the creation or prioritization of parenting time, to increase wellbeing for both parents and children. As a single parent balancing three classes, research, trainings, work, and raising his son, he knows that optimizing parenting time is important. Corey is grateful that the University of Minnesota is very flexible around his parenting schedule, allowing him to bring his son with him to the office and to class when needed, as he did on this day.

Corey will complete his coursework this spring, earning his Master’s, and will take his preliminary exams this summer. After school, he looks forward to teaching sociology of the family, sociology of education, or sociology of race… or, he says he could even teach a statistics course, knowing that he could make the subject matter a little lighter and bring a little energy to it, to help relieve some common feelings of anxiety that some students have around this subject.

While he would love to teach at the U of M one day, Corey’s plan is to start out by possibly teaching as an adjunct instructor at Century College or another metro-area school, or to continue working within the U.S. National Institute of Child Health and Human Development. He would like to stay local as his son finishes school.

Corey also grew up locally in St. Paul, graduating from Northeast Metro 916 ALC in the Roseville school district. When asked ‘why did you choose Century?’ his son chimed in, “because it was the best one!” But Corey’s answer was, “it’s complicated.”

Corey toured Century as part of his 916 program in high school (Century is also home to the 916 Career and Technical Center for high school students). It was actually the only college he toured. So right out of high school, Corey enrolled at Century in the summer, but the start date came up so quickly that he panicked and ended up going to Globe University instead.

Unfortunately, he wasn’t aware of the implications of not withdrawing from his Century classes, so he ended up with straight “F’s” or incompletes that first semester. And after a year at Globe, he stopped out, coming back to Century the following year.

Corey actually started and stopped at Century three times before he found his groove and completed his AA degree, because, life. What helped him stick with it the last time he enrolled was he finally got connected with all the resources at Century to help him navigate the complicated world of higher education, while also working and raising a child.

Corey credits his counselor for introducing him to Wade Warner in TRiO – a federal outreach and student services programs that provides counseling and services for people from disadvantaged backgrounds. TRiO was the gateway that opened the door to many opportunities for Corey. That, and Student Parent Center staff Anne Turnbull and Katie Vadnais, who connected him to parenting resources. Having an onsite childcare program for his son was a great convenience, too.

Corey told me about how path to his degree at Century, an AA in Sociology, was not a direct one. He started out as an Accounting major, switched to Business Management, then switched to Law Enforcement, where he completed his first Sociology course with Susannah Dolance. This was the class that changed everything. In an Intro to Sociology class, Susannah gave Corey the opportunity take her course as an honors student, which enabled him to do research. He was then allowed to extend a group project on accessibility of pre-K, giving him the experience of interviewing Head Start teachers, program directors, parents, and legislators, to see how they viewed this topic. He got his first taste of visiting the capitol building, the legislative process, and qualitative data, and he loved it. Susannah picked up on his passion and planted the idea that if he really liked research (which he did), that he should consider a PhD. And then she wrote him letters of recommendation to help him achieve that goal.

Corey had always thought he would one day end up at the University of Minnesota, but he had imagined he would do so as an athlete (he was a multi-athlete as a youth). He really wanted “that college experience”, and he was pleasantly surprised that even though he didn’t get into the U of M right away, he found that experience first, at Century.

The student life opportunities and the rec and wellness programming here at Century are actually quite robust, and Corey didn’t feel like he was missing out on the college experience at all. He said the key for him was to just get involved.

And his involvement while he was here was quite impressive! (See Corey’s list of awards and accomplishments, below). His experiences with TRiO ignited a desire for more involvement, which led to connecting with Jenn Rassett,Director of Student Life and Leadership Development, about joining Student Senate. Corey believes that all students should get involved with student life. “I didn’t really feel connected with Century until I got involved with Student Life,” he said. “That’s what really made Century a place where I would spend more than just time in my classes. I would schedule time to stay on campus.”

That involvement blossomed into joining Phi Theta Kappa, where he attended the national PTK convention in San Antonio, Texas and found himself surrounded by inspiring students who were headed for Harvard and the like. He went on to found his own student club, the Social Change Club, and also joined Brother2Brother (shout out to Marcus Watson for the great experience). “Century is more diverse than the U of M, but even within Century it was nice to have a space for black and Latino males to talk about any kind of issues on their minds.” Corey said.

Corey also appreciated the quality of education he got from Century. Corey completed his AA degree in 2015, then transferred to the U of M and earned his Bachelor’s degree in just two years, because ALL of his Century credits transferred over, some of them even as upper-level credits.

When asked if he has any advice to future students, Corey says, “Go to office hours, talk to your professors, tell them what your interest are, because they can help you figure out ways to follow your interests and incorporate it into your classes. Definitely take advantage of counselors and advisors.”

Corey urges students to “get involved as much as possible, and don’t limit your goals. Enjoy your time.” That connectedness at Century has followed him beyond our campus. He enjoys seeing fellow Century transfer students around the U of M campus. “There’s so many Century students here that I see all the time, it’s super fun to bump into people,” he said. “I wear my Century stuff all the time and people walk up and say, ‘hey, I went to Century too!’”

Corey Culver, Century College Alumni Association Board of Directors since 2015