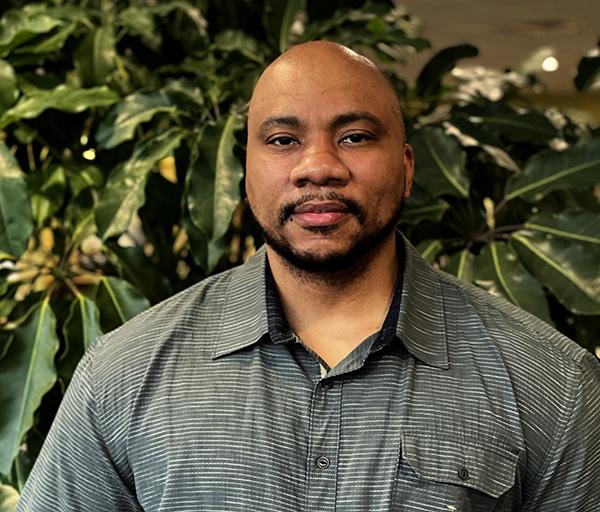 As an adult learner, David Stewart already had a lot of life experience when he came to Century.  A 20-year Navy vet who served during two wars (the First and Second Gulf Wars), David had also worked in law enforcement.

He connected with Century College's Veterans rep, and quickly got the assistance he needed to enroll and begin his classes.

Century College was close to home, and perfect for his schedule.  As a busy single parent, he worked full time and attended classes full time, as well.  "The first couple of years, I would work from 7:30 a.m. to 3 p.m., and then go to school from 6 to 9 p.m.," David says. "And if I needed a tutor for help with writing, I would visit the Writing Center. The guidance I received there also helped me to write better reports for work, too."  He has worked in corrections for Ramsey County for the last 15 years.

David 's intellectual curiosity led him to seek out higher education.  "I wanted to learn more about the ins and outs of the law enforcement field," He notes. "I wanted an in-depth college experience."

“All the instructors at Century College were supportive.  I loved them all.  They really made me think about and focus on what I was learning," David says. "And that made me be a different, and better person.  For example, taking Jill Korpik's Earth Science class was really challenging."

David had originally started college at 18, when he left his home in Illinois for Alabama.  He played ball for his college team, hoping to go professional.  Unfortunately, he didn't get the support he needed to continue.  After thinking about his next steps, and discussing his options with a Navy recruiter, he decided to sign up.  Thanks to the Navy, he traveled the world. "I saw many countries, so many ports, one country after another," David remembers.

With his Navy and work experience, David created a solid foundation for resuming his college career as a mature student.   An added benefit for his years of military service meant that he qualified for the MN GI bill, and was able to graduate debt-free.

He is currently planning for the next phase of his career, and hopes to work for the federal government one day, perhaps for the Veterans Administration,

For those who may be considering college, David offers this advice:  "If you’re thinking of a 2-year college, I recommend going to Century College, where you aren't just a number.  The College has a nice atmosphere, and it's peaceful there. The smaller class sizes help, and the instructors will make you will feel comfortable there."