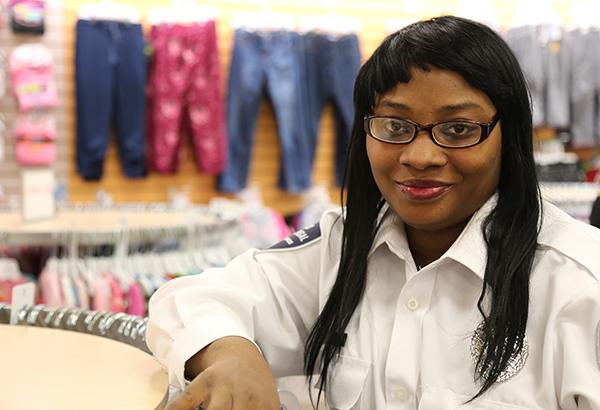 Donnita Williams, 2018 Century College Criminal Justice graduate, knows all about making and achieving goals and taking risks. “I accomplished so much—my goal was to graduate before I turned 30, and I made it," Donnita says.  "At Century,  I felt at home right away, and got the support I needed to be successful. "

Reaching Out and Getting Support

Working two jobs, raising two children and going to college full time wasn't easy for this first-generation student, but Donnita quickly learned to reach out and ask for assistance.  She loved Century College's Reading and Student Success Center.  Instructors Cathy Crea, Michelle Jersak, and then-President Ron Anderson were all extremely helpful. "I felt hope there," Donnita remembers, "They taught me a lot about responsibility.  I miss my Century family."

While working as a security guard at Maplewood Mall, Donnita recognized a new opportunity, and an exciting new direction, when a friend suggested she open a gently-used children's clothing business there.  Using the money from three jobs and her tax return (and no loans), Donnita jumped at the chance, and  recently opened Nefertiti.    This was her time, she figured.  If she chooses, she can return to school and finish her four-year degree later.

She remembers how difficult it was to find children's clothing when she didn't have extra money.  "You think about others when you go through hard times.  That's why I opened my store.  Most items of clothing are under $20, except for new coats and shoes. My clothing is affordable and reasonable."

When faced with a new challenge, Donnita  advises, "Try it and don't be scared--push yourself. Keep focusing and never give up on your dreams."  These were lessons she learned while at Century College.

For other new, first-generation students, Donnita offers these tips, "Focus on applying for scholarships--it's free money.  And if you're scared or shy, reach out and ask for help. Century College is like a big family.  No one will put you down.  The help is there."  She adds, "Don’t let anyone talk you out of something you want to do. I pushed through, and I had three scholarships.  Century is a place where you can find success."