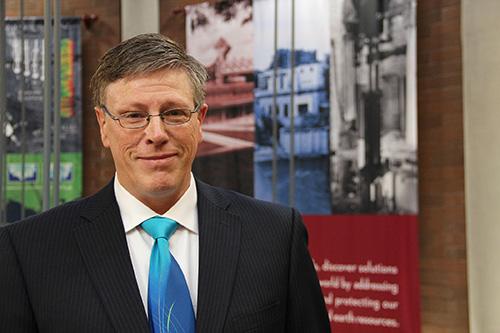 After encouraging his daughter to attend college, alum Doug Novak decided to become a role model for her and return to Century College and get a degree. "I had encouraged her to go to college and felt hypocritical for not attending myself," Doug remembers. "With encouragement from family, I decided that if she could do it, so could I."

Doug had attended Century College as a Post-Secondary Enrollment Options (PSEO) student in high school, so returning to the College was a natural choice.  He decided to get an Associate in Arts degree, and discovered that he enjoyed learning--especially mathematics and science--and he also enjoyed helping others learn. Century College's faculty played a major role in his success as an adult learner, and they encouraged him to give back to others.

"The teachers at Century College go out of their way to make sure you understand the material," Doug notes.  "And I had many teachers who were especially outstanding.  The first was Ed Kruszka from the Math department.  He encouraged me to do well and help other people, and that stayed with me.  It was easier to learn when I could help teach someone else."

Angela Simons was another faculty member who helped Doug.  "She is a great teacher.  Calculus was like a foreign language, but she made sure I understood the material, and I went on to get As in my higher-level math classes."

He completed his AA degree with high honors, while working as a tutor in the Mathematics Resource Center at the College.  He was also awarded Outstanding Student of the Year in Mathematics.

At the same time he was attending college, Doug was recovering from addiction issues, and helping people became part of his lifestyle and his work ethic.  He also started a remodeling business during his college years, which is still going strong, and he recently opened a house for recovering addicts to live in a safe, supportive environment.

In addition to his AA degree, Doug went on and completed another degree in Century College's Engineering program, also receiving high honors for his hard work.  He transferred to the University of Minnesota, graduating in the Civil Engineering program. He works for WSB and Associates in St. Paul.

"There are many teachers at Century College that helped me along the way, " Doug says. "They taught me how to be successful and push forward when I didn't think I could.  Century College showed me my love for and ability to  learn.  I'm still in touch with the friends and teachers I met at the College."