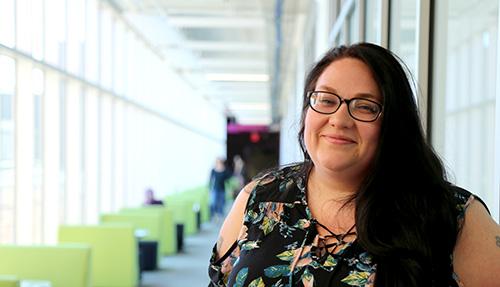 For 2016 graduate An Garagiola-Bernier, attending Century College was the best decision of her life. When her husband had been injured at work, he decided to return to school to pursue a new career. He told An, “I'm only going if you go.”  A first-generation college student, and a 30-year-old mother of three, An had been out of school for 12 years, and the prospect of going back to school was daunting.

An accepted the challenge, and the College quickly became a second home. "Classes are designed to fit around students' hectic lives, and Century College faculty and staff are experts in their fields, dedicated to student success. The individualized attention and career planning advice is top notch," An says.

Additionally, An found that the key to her success was campus involvement. "The one thing I'm most proud of is the Resource and Support Center (RSC), which I helped establish in 2015-16. The RSC offers access to food, clothing, health care, legal aid, scholarships, daycare assistance, violence prevention resources, and much more for students in need. Century College is a national leader in recognizing that students need more than academic support to reach graduation," she notes.

Century College also helped An realize her childhood dream of becoming a writer. She remembers, "Because of the struggles I faced in my life, I thought I had missed my chance. For me, the turning point was opening up to new possibilities.  With the encouragement of faculty advisors Rich Kuss and Dana LeMay, I became the founding editor of The Century Times news magazine.  I won national recognition for my articles, and found my passion and career path because of the stories I wrote about student poverty."

An blossomed academically and continued to excel, eventually applying for and becoming both a Jack Kent Cooke Scholar and Newman Civic Fellow, "I wouldn't have gotten there without the support of Century College faculty.  Counselor Michele Jersak and Dr. Ruth Wollersheim helped me apply for the Cooke Undergraduate Transfer Scholarship.  On graduation night, it was announced that I was one of 75 scholars nationwide. Century College prepared me to be in the top 1% of applicants. It has changed my life and my family's life," An remembers. She is now a junior at Hamline University in St. Paul, where she attends on scholarships.

"I am currently looking into graduate programs to continue researching the nexus of intersectional poverty studies and upward economic mobility via higher education. For someone such as myself, who dropped out of high school at age 16, Century College gave me a second chance to pursue my dreams, and hope for the future. My goal is to be a Sociology professor and poverty consultant. Before Century College, I didn't even know such a job existed. But when I made the choice to follow that path, Century College staff and faculty made sure I had the connections, skills, experience, and training to make it," An states.

An offers this advice for prospective students, "Think big!  College is a time to discover what you are passionate about and draw a map of how to get there. It's hard work, but your investment and effort are matched by Century College faculty and staff who share an interest in your potential, and have a vested stake in your achievements. Through career planning, service learning, rigorous academics, increased cultural awareness, co-curricular and extracurricular activities like Phi Theta Kappa and other student organizations, you will gain skills that will give you a powerful advantage in the workforce."

"Whether you are the first in your family to attend college, a returning adult looking for a career boost, pursuing the arts, sciences, or a technical career, Century has what you need to succeed," An states.