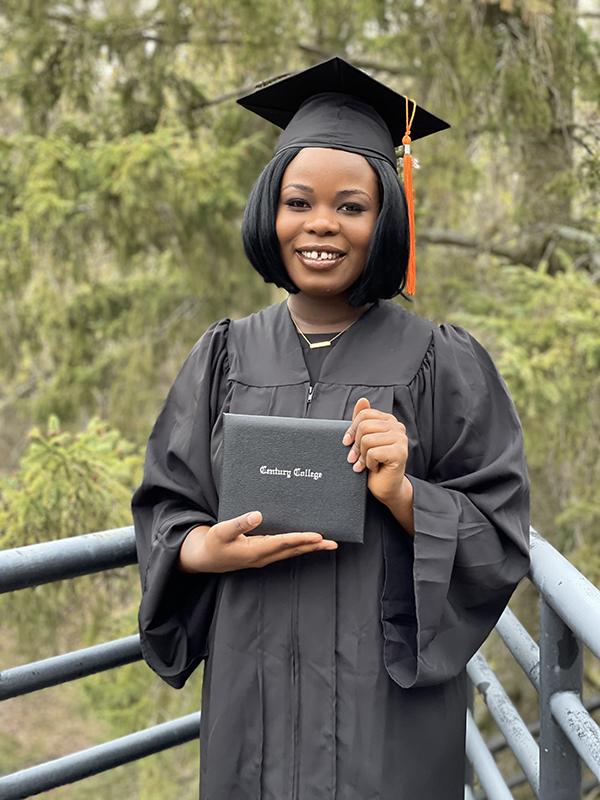 Alum Hope Nixon had tried taking college courses at two other academic institutions before arriving at Century College. "I wanted a new, diverse environment where I could find a community of family, and I found that at Century," says Hope. "I wanted to be held accountable, and to hold my instructors accountable for helping me find my career path."

Originally from Monrovia, Liberia, Hope is a first-generation student, and feels pressure to do well in her life and make the most of her opportunities.

While in middle school, she wanted to be a lawyer; however, in college, Hope started taking science courses.  She was drawn to medicine, and, after observing how her grandmother was cared for when she had a pacemaker installed, Hope decided to become a cardiologist.

Hope did her research and found that Century ticked all the boxes for her requirements.   She found a sense of community, and soon realized that the Century College staff and faculty were willing to go above and beyond to help her succeed.  While taking classes at Century, Hope has also been working two jobs.  It hasn't been easy, but Hope learned the importance of asking for help, when she needed it, in her academic and personal life.

Advisor Michele Jersak went the extra mile to help her, reaching out when Hope felt overwhelmed. "Michele wasn’t just an academic advisor, I got personal counseling from her," Hope says. "Michelle sat me down, and got me to open up during difficult times in my life.  It was a very successful. She extended her hand out to me.  She was a delight as a counselor."

Biology faculty Sharon Ankrah asked Hope, “What can we do to help you?  We can work one-on-one."  Sharon suggested study solutions and resources for Hope.  "I used Sharon's suggestions, and I could see myself improve," Hope remembers. "Sharon would send emails, FaceTime with me, and set up Zoom calls, and this in turn led me to reach out to other professors."

Earth Science instructor Joe Osborn was particularly helpful. "Earth Science has lots of math, and I was able to get feedback from him," Hope notes.  "I would sit with him during office hours, and ask him questions.  He guided me step by step. I applaud him for being patient with me.  Joe made sure I understood what I was learning."

Although Hope didn't have a lot of time to get involved in Student Life activities, she did join the Black Students Association, where she got to know other students, and volunteered to help with a presentation during a webinar in Black History month. She found it a wonderful opportunity and enjoyed the guidance she received from Corey Crowder, Multicultural Services Coordinator and advisor to the BSA.

Hope is transferring to the University of Minnesota this fall, and plans to complete her B.A. in Biology, Society and Environment in the next year and a half.  As she begins the next chapter of her life, Hope is grateful for her time at Century.  "Century College is one of the best colleges I’ve attended," Hope says. "I am more than pleased with my Century College experience."