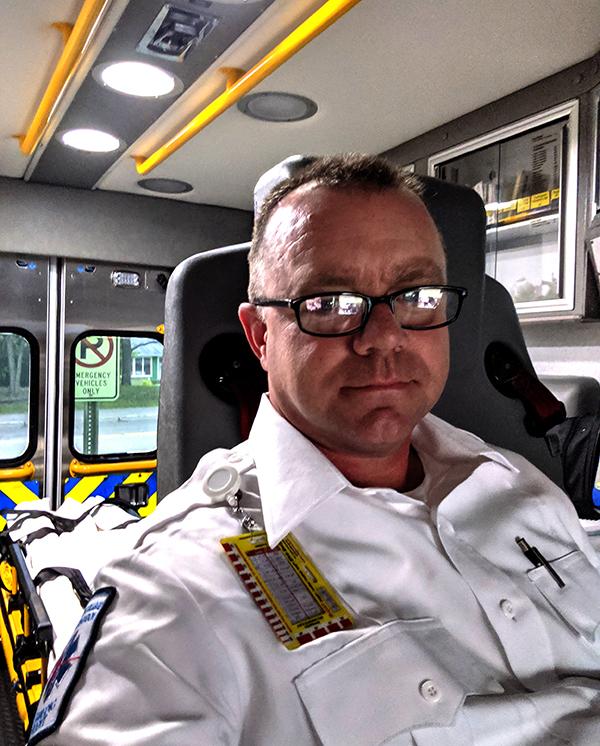 Century College alum Jason Anderson has a history of serving and helping people wherever he goes, so it's natural that he was eventually drawn to a career as an EMT and Paramedic.

Years ago, while living in Arizona and working as a mechanic at Tires Plus, he was inspired by a roommate who was an EMT.  When Jason returned to Minnesota, he decided to investigate the EMS field by taking a course with Century College instructor Lynda Goerisch.  "I absolutely loved her," Jason remembers, "She is an amazing teacher."

Jason worked as a firefighter for Oakdale for many years, and completed his EMT training.  After hearing that US soldiers were dying on battlefields without a medic available, Jason signed up to be a combat medic with the military.  He served for 10 years, completing tours in Afghanistan, Iraq, and Kuwait.  When he got out of the military, he returned to Century College for his paramedic training.

As a vet, Jason knew that Century's Veterans Center would offer the help and support he needed.  "Shannon, the former Vets Center Coordinator, was a tremendous asset, helping with paperwork, even following up with my wife to ensure that everything was fine,"  Jason says.

He also found support among Century's faculty.  "Lynda Goerisch is my go-to person,  and  I have great respect for instructor Chris Caulkins.  Dave Borrett helped me with my military stuff., and Kim Schmitzer was great.  I can’t praise them enough for their flexibility.   They care about their students and the training they give them. They take their jobs seriously and they’re so smart. They have well over 100 years’ experience amongst them.  I can’t brag enough about them. I love those guys--they helped me through some of the PSTD stuff. Dave helped me put things in perspective.”

Jason recently passed a very difficult test to get certified and be placed on the National Registry as a paramedic.  He's currently serving with the military ministry of his church, reaching out to vets and helping those with PTSD. He meets with them wherever they are comfortable, at home or outside.  "I love helping people and reaching out to them, regardless of their background.  I just want to be able to be of service," Jason says. "I just want to give people hope--especially to those who are suicidal."

Jason is pondering the next chapter in his life, and determining where he can be of most service to people.  "I'd love to come back to Century College and teach younger EMTs", He notes, "But wherever I go next, I know that my Century College training will serve me well."