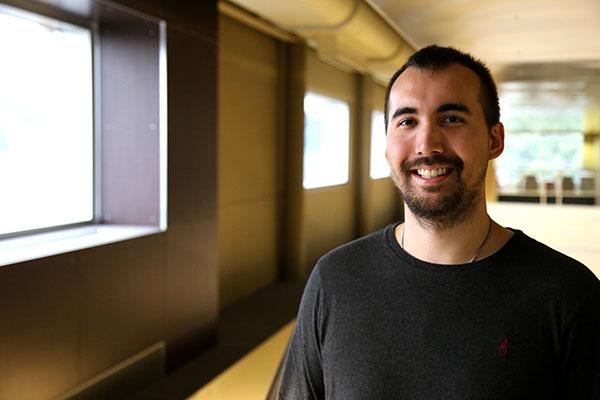 After struggling in high school, Century College alum Joel Updyke was working in the food service industry, supporting a young son, and wanting to do more with his life.  As a returning adult student, he wasn't sure that college was right for him.  He is now a University of Minnesota Ph.D. candidate in Pharmaceutics.

"I chose Century College because the tuition was low, there are a variety of technical programs offered, and the credits transfer easily to four-year institutions," Joel remembers. "As a first-generation college student, you have no idea what you can do with a degree or what degree to pursue."

Joel initially looked at Radiological Technology and Dental Hygiene as possible careers; however, he began taking biology courses, and got hooked on chemistry after taking classes from Century College faculty member Joann Pfeiffer. He soon discovered that he was a good student and that he loved to learn.  It was a revelation to him, because he failed chemistry in high school.  He excelled in other subjects, too.

"I didn't think I would do well to start, and then, I got an A in a lower level math class, and that was the beginning," Joel remembers. As his confidence grew, Joel took time to explore all the areas that interested him.  "I was hungry for knowledge, and in a college environment with people from all backgrounds, including older students. You definitely feel the culture is different here--more open, inclusive, and accepting.  Century College was an incubator for me. I worked very hard and tried everything."  He also received a Hill Scholarship from the Century College Foundation.

The Turning Point: Scientific Research as a Career

In 2013, a turning point came for Joel when Pfeiffer recommended him for a summer research project at Hamline University.  It was his first experience working in a lab, and he enjoyed working on a gene-editing project.  She also encouraged him to consider graduate research after receiving an undergraduate degree.  She informed Joel that Ph.D. students in science and engineering receive a tuition waiver and a stipend towards completing their graduate degree.

Joel's hard work at Century College paid off in 2014, when he was accepted into the University of Minnesota's College of Science and Engineering as an undergraduate transfer student.  As a U of MN undergrad, he continued to explore different  areas of scientific research, holding research positions with the Center for Sustainable Polymers and the Biotechnology Institute at the University of Minnesota.

He also explored different career options, by taking a 6-month internship in International Falls, Minnesota, with Boise Paper as a process engineer.  He also interned with Nature Works at their R & D headquarters in Minnetonka, Minnesota, working with a Ph.D. chemist, which he loved.  "After interning with a Ph.D. chemist, I knew that I wanted a research-based career in an industry like his, and decided to pursue graduate research after finishing my undergraduate degree." Joel says.

Joel is now an advocate for taking the time to find the right path.  "There's pressure about going to college right out of high school at 18 and earning your degree as quickly as possible, but it's all right to take time off to live your life and to work for awhile.  It's okay to be a returning adult student. I became more confident because I had taken the time to explore life and academia.   I didn't know if college was the right thing for me when I started, but studying at Century College was a low-risk way to find out, because it's a quarter of the cost of some of the four-year universities.  Choosing to study at Century College was an easy, but essential first step towards my career path," Joel says. "It's really important to do your best, because it pays off when you work hard and you're a good student. And, because I had time to sample different classes, research positions, and internships, it's taken me to a good place."