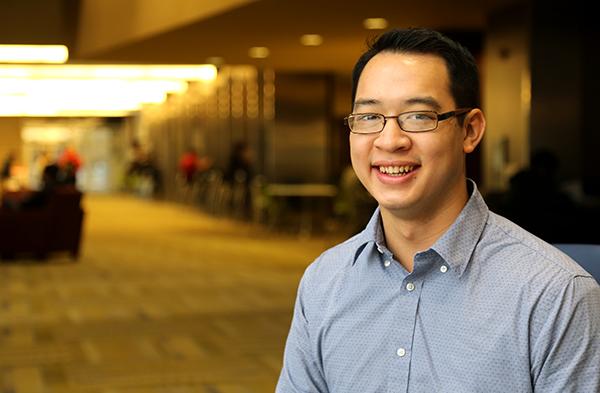 When Century College Engineering alum John Phan left high school, he was the first in his family to attend college.  As a first-generation student, he didn't have any guidance as to how to apply to college. "Many of my friends in high school either went to Century or suggested Century as a good start," John remembers. "I would not be where I am today if it weren't for Century College and the passionate instructors, who inspired me to succeed."  John is now a senior in the Material Science and Engineering department at the University of Minnesota.

John started Century College as a Criminal Justice major and decided it wasn't for him, so he took general classes for a year and a half.  Near the end of his second year, he took a chemistry course, and discovered he not only enjoyed chemistry, but sciences in general.  "I still feel passionate about criminal justice, but science is more straightforward.  You can't argue with facts," John says. " From there, I decided to become an engineer and formally enrolled in Century College's engineering program."

John soon discovered opportunities beyond the classroom. He became a chemistry tutor and worked in the chemistry department, helping prepare for labs.

Under the guidance of Jessica Bell, Century College biology faculty member, John and other Century students teamed up to create a proposal for The Innovative Minds Partnering to  Advance Curative Therapies (IMPACT) challenge, which provides undergraduates with an opportunity to find unique solutions to health problems, and to present their findings to experts at the Mayo Clinic.   John and his team members shared their research on bipolar disorder at a poster session and talked to experts in the field, thanks to this partnership with Mayo.

He was also involved with the North Star STEM Alliance, which helped him transition to a four-year university.  He met with professors and student mentors at the University of Minnesota, and was able to attend professional conferences, such as the annual American Chemical Society meeting.

"Affordability was a huge factor for me in my decision to attend Century College," John reflects, "I left Century College with two degrees, and zero debt."  He also worked three jobs, including two campus work-study positions and one retail job.

Smooth Transfer to the University of Minnesota

John was able to transfer smoothly to the University of Minnesota. "I definitely wouldn't be here if it wasn't for Century. I still run into my peers from Century here who have also transferred and we talk about how good it was to go to Century first," he notes.