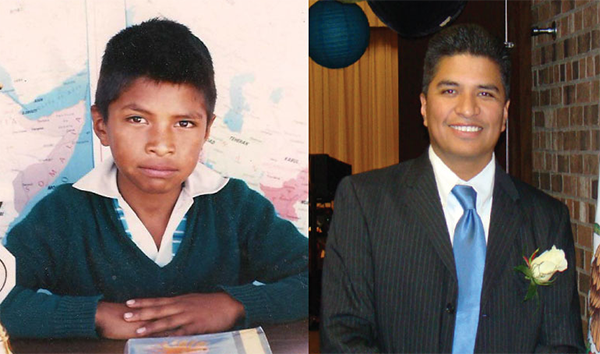 (l to r) Juan Vazquez as a 5th grader in Mexico, and years later, as a college graduate and business owner.

Juan Vázquez, CEO and owner of Multivision, knows firsthand that the influence of supportive teachers can be life-changing. Growing up poor in Mexico, where his father died before he was born and his mother didn't have an education, Juan was viewed as someone who couldn’t learn. Too discouraged to continue his education, he completed one year of high school and quit.

When he came to the United States at 18, Juan began to take ESL classes and did very well. He quickly moved on to complete his GED and his teachers urged him to go to college. Fast-forward a few years, and Juan would become a college graduate, have a 4.0 GPA, make the Dean's List, and eventually, start his own marketing business.

A Sense of Belonging at Century College

At Century College, Juan was comfortable in the College's warm, welcoming environment. ESOL instructor, Ellen Mamer, saw Juan's potential and encouraged him to get his Associate in Arts (AA) degree. "I met wonderful, supportive teachers at Century, especially Ellen," Juan remembers. "They believed in me and I believed in myself."

"You get to meet people from everywhere. You form friendships that last forever. Ellen was a lifelong friend," Juan adds. "I belonged to the school. The school was part of me. I felt a sense of belonging--being comfortable, being safe. And at the school, we knew we were part of the larger community.”

Juan not only enjoyed the academics, friendships, and the support of the faculty and staff, he also enjoyed being involved in Student Life. Despite working full time and going to school, he took the time to participate on Century's intramural soccer team, which won a college tournament.

After completing his AA degree at Century, Ellen Mamer asked Juan to help the College work on a marketing campaign to increase the enrollment of Latinx students. Juan was working on his Bachelor of Arts in Business Administration (with a Marketing minor) at the University of Wisconsin, River Falls at the time. He had thought it was his destiny to in work in business management, but after working with Century, he decided to create his own marketing company.

When Juan was beginning his marketing career, the Hispanic market was a niche market. "At the time, it wasn’t on anyone’s radar," Juan notes. "Radio and newspapers just wanted to sell spots and spaces." Seeing an opportunity, and understanding the community, Juan changed the marketing messages to be relevant and customized to the community. His goal was to make messages more relevant and he soon became the critical link between businesses and customers, which worked out well for everyone.

The best part of being in charge of his business and his career is that he’s busy but flexible, loves what he does, and is living his passion. "I can work remotely, and because of technology, I work with freelancers and create job opportunities without a large overhead," Juan says. "I work with people in Mexico, India, and all over the world." As an extrovert, getting along with people from various cultures comes naturally to Juan. He's a people person and believes that in life and business “you treat everyone with dignity and respect.”

Juan plans to expand his company into other areas, such as a website-based translation service, where customers can send a document in and get it quickly translated by a professional translator. During the pandemic, he’s been making strategic plans for making his business more nimble and agile and is working on ways to help people remotely. "It’s part of a whole pie, adding more slices.  Everything evolves," Juan says.

This fall, his daughter is beginning her college career at Century. "I told her that it's a very smart move. You'll save a lot of money, get a good education, and you will be grateful the rest of your life for doing both," Juan says.