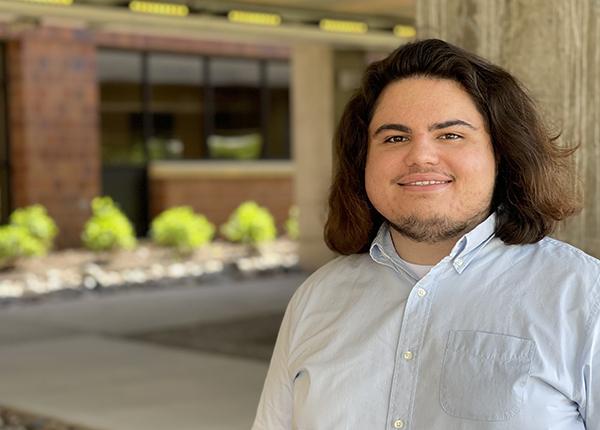 Like many of our alumni, Kevin Rodriguez-Hines is from a "Century College family".  And, like his brother Dain, Kevin is a graduate of Century's Visual Communications Technologies (VCT) program. Both brothers earned their AAS degrees in Filmmaking and Video Production.

Kevin began his academic career at the College when he was taking nursing courses while in the 916 program in high school. One of the few male students in his classes, Kevin would often give advice and show the other students how to improve their nursing skills.

However, after passing his nursing exam, he realized that he wasn't heading in the right career direction.  His parents advised him to find a career field that he enjoyed and that would lead to a self-sustaining job.

While he was trying to decide on his next career move, Kevin would watch his brother Dain do his VCT work assignments.  Soon, he was sitting in on Dain's classes, while instructor Mike Eddy jokingly suggested that Kevin would join the program, and do better than his brother.  Fascinated by the program, Kevin soon joined enrolled and found his career path.

Kevin loved the supportive atmosphere at Century College, and found the VCT faculty especially encouraging. "Everyone is welcoming and nice. Mike Eddy is a fantastic teacher," Kevin notes, "He understands students, and that makes the students want to try harder."

"The key to succeeding at Century College is to be open and talk to your teachers, because they will work with you.  They want you to do well and accomplish your goals," Kevin says. "You’ll understand your lessons better, and you’ll excel."

Kevin discovered that one of the most helpful, real-world experiences was working on projects in instructor Tunji Akanbi's classes.  "You put in a lot of  hard work in Tunji's classes, and it really pays off.  I learned how to communicate with Tunji as a client.  I asked questions, took notes during the interview, and that really sharpened my communications skills," Kevin remembers.

Kevin plans to work freelance with brother for now; however, becoming a teacher may be in his future. He is naturally driven to help others, has a lot of compassion for those who need extra help with their classwork, and he's willing to go the extra mile.

At Century, he gained valuable teaching experience.  He worked as a Tutor Linked to Classes, and, despite the pandemic, spent much of his time in the last year and a half at the College.  He worked with students online, organizing Zoom calls when necessary, and also worked hands-on with VCT students each and every day in the VCT lab.  "I followed guidelines, sanitized equipment and workstations.  COVID-19 made things ten times harder, but I really wanted to help my fellow students succeed," Kevin says.

"If I can inspire people like Mike Eddy does, I would love to be there (at Century),” Kevin says. "All the teachers were great---John Kothera, James Morris--I felt like I had found a second home in the VCT program.”