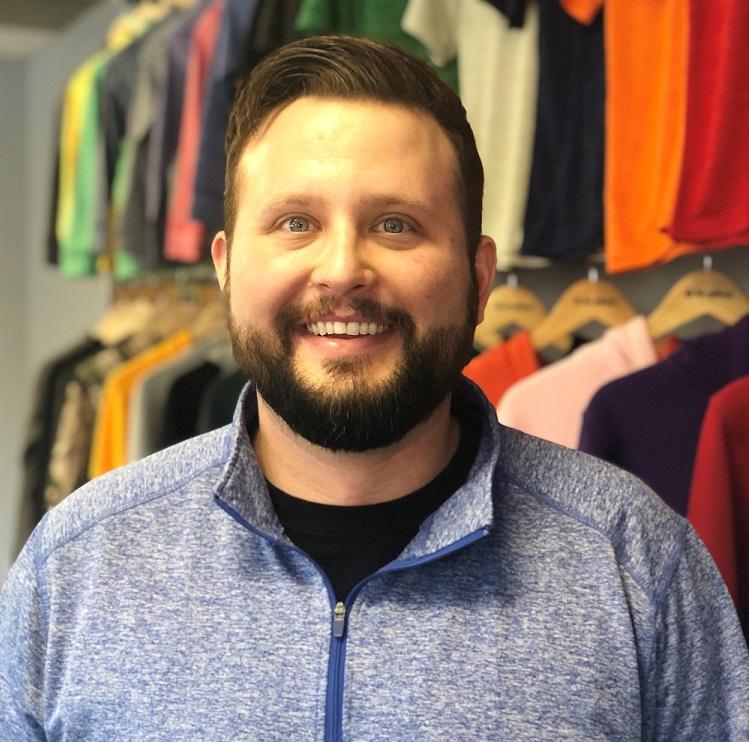 I sat down with Century alumnus and newest Alumni Association board member Kyle Kasprzyk in the brightly lit front office of the wholesale clothing warehouse he owns with his father. After occupying his canine companion, Gus, with some toys, we got to chatting about Kyle’s experience at Century College.

Kyle grew up in Woodbury and started out at Century right after high school. He completed one year before transferring to Minnesota State College Southeast in Winona. Like many new college students, his focus of study was at first undecided - but when an advisor helped him narrow down to his top three areas of interest, he chose Marketing, Business, and VCT (Visual Communication Technologies). Although he ultimately chose Marketing, the VCT path was intriguing because it aligned well with what he and his friends had done for years – shoot videos of themselves doing crazy stunts with skateboards, snowboards, and other extreme sports.

Incidentally, it was his love of extreme sports that altered his course at MSC Southeast and brought him back to Century. Kyle suffered a fractured skull due to a longboarding accident while in his first semester at MSC Southeast. After spending nine days in the ICU, the doctors said he would need six months of bed rest and a 12-month total recovery period. Needless to say, he came home and took the year off.

Back in the cities and after recovering, Kyle joined his father in the family business as a sales representative. Originally founded in 1991 in his parent’s garage, Heather Ashley, Inc. - named after the co-owners’ daughters - grew to be known for their high-end specialty wool coats. In the mid-90's they transitioned to a focus on sportswear apparel, which is what the company, now named In Play Sportswear, specializes in.

In Play Sportswear serves 41 states across the country, but primarily the Midwest. Their customers range from local mom and pop shops like Hisdahl’s here in White Bear Lake (featuring the popular orange and black hockey-style lace up hoodie), to the Scheels Sporting Goods retail chain with over 27 locations. They are currently most excited for their new, exclusive partnership with Mossy Oak for the trademarked Breakup Country Snowdrift winter camo pattern coming in 2020.

While working in sales, Kyle returned to Century and enrolled in the Marketing program. In this program, Kyle learned some valuable skills that helped with his ascent from a sales representative to his current position as Vice President and Co-Owner of In Play Sportswear. Most notably, the accounting classes he took were invaluable as he now keeps the company’s books, and the international business class helped him navigate cultural differences and gain a better understanding of how their overseas partners do business. Kyle says those classes, along with the team projects and collaborative work he experienced were really helpful in launching his career.

When asked if Kyle has any advice for future students, he said, “If you’re thinking about it, definitely go. I love community colleges, and with the affordability at Century, I think everyone should start there.” Part of the reason why Kyle joined the Alumni Association Board of Directors is because of his passion for both Century and community college in general. “I feel so bad for those with major student loans, so that’s why I say, go to Century. The people are awesome, and it’s just a great community.”