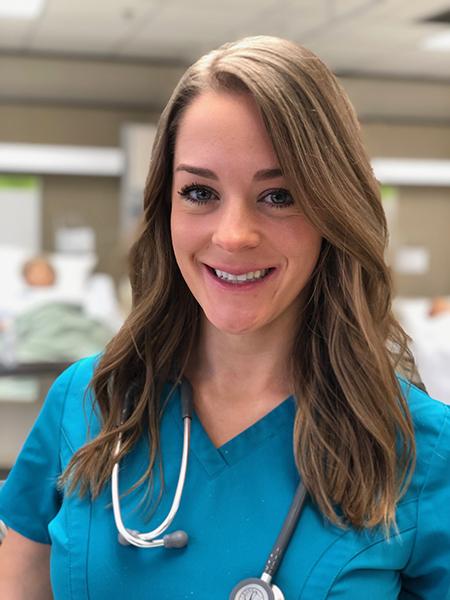 When alum Tara Wilson was looking at her educational options, she found that Century College offered everything she wanted.  As a single parent, affordability and proximity to home and her son’s preschool were priorities; however, she soon discovered that the flexibility of classes, and the numerous hybrid and online courses offered were also bonuses.  Her new school schedule worked perfectly for Tara and her son.

An Abundance of Resources and Guidance

After her first semester, Tara decided to follow her dreams and go into nursing.  Although she was intimidated by her goal, and felt like a fish out of water, she was determined to do well.

Tara soon joined the TRIO program, and discovered there were many helpful resources and tutors to assist her.  Because she found math particularly hard, she went to a tutor for help, and got an A in that class.  After the first semester, Tara got A’s in all her classes, which was a real confidence booster.  (She had struggled to do well academically in high school.)

Tara also met regularly with her career counselor, and together, they laid out her options so that she could realistically achieve her dream of a nursing career.  She planned carefully, took the necessary coursework, and transferred into the University of Minnesota's Nursing program after two years at Century College.

Tara was amazed by the opportunities for learning leadership skills through Campus Life activities.  She joined the Phi Theta Kappa (Honors Society) Board, got research experience, and would often bring her son to meetings.  She became a public speaking tutor, and a Student Ambassador.  In addition, she played soccer, and was captain of women’s soccer team in her second year.

"There’s a myth that community colleges don’t have extra curricular activities or options compared to 4-year schools, which just isn’t true," says Tara.  "As a bonus, I met people from all walks of life, both in my classes and in my extracurricular activities."

Tara earned a certificate in Communication studies, completing a series of classes dealing with intercultural, interpersonal, and group communication as well as public speaking--all of which helped enhance her leadership and people skills.

"At Century College, I increased my leadership experience--both inside and outside the classroom; additionally, the small class sizes meant I was comfortable getting to know my professors.  I learned to advocate for myself, which set me up for my success at the University of Minnesota," Tara notes. "Everything I learned from Century gave me the confidence to reach higher and to strive for goals I didn't know I was capable of.  My hard work set me up for my future success."

The TRIO staff came to Tara and encouraged her to apply for a Jack Kent Cooke Foundation scholarship.  With their help and support, she applied for and got the prestigious scholarship, which further set her up for her successful transition to the University of Minnesota.  The Cooke Scholarship money helped her with her childcare and living expenses, and took away the financial stress and strain, enabling her to focus on her coursework and on raising her son.

Tara graduated last May from the University of Minnesota's Nursing Program, and in August she became a Labor and Delivery Nurse with M Health Fairview.  Her next goal is to join a midwifery program in a couple of years.

For those who may be considering Century College, Tara offers this advice to new students, "Go for it!  It’s less intimating than you think it will be.  I was  scared to start, but at Century College, there’s so much help available to get you where you need to be.  The resources are there—you just need to be motivated to do it!"