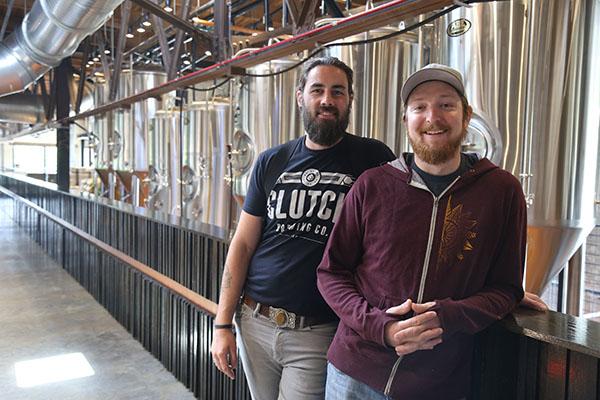 Friends since the 6th grade, Century College alumni and Clutch Brewing Company owners Max Boeke and Jordan Standish have more in common than just a passion for beer. They're both from the White Bear Lake/Vadnais Heights area, they earned their AA degrees at Century College, and both transferred to Metropolitan State University to get their BA degrees.   Max majored in philosophy and minored in business, Jordan majored in liberal arts with a minor in anthropology.

Both worked full time during their college years, as well.  Affordability  and flexibility in class schedules were major factors in their decision to come to Century.  "At a four-year college, you would pay more than double for the classes," Jordan reflected, "At Century College, you'll pay at least half the cost---but you don't get half the class!  At Century, the faculty really care about the subjects they teach."

Jordan initially wanted to get his general education courses done, but he also wanted to expand his worldview.  He found that the variety of courses, and the level of care of the instructors set him on a course of taking as many different subjects as he could.  While at Century, he earned a Horticulture Assistant certificate, along with his AA degree.

"The student base at Century College is different," notes Max. "People are more focused on finding their careers and want to get into their professions, and the teachers appreciate that."  He wasn't sure which major to choose, so he picked the Associate of Arts degree.  He enjoyed the wide range of classes.  "You get a feel for what you're interested in, and a taste for things."

Since graduating, they've worked in a variety of entrepreneurial jobs.  Jordan worked for Hed Cycling, and as a beer distributor, and also worked in sales for Flat Earth Brewing. Max worked at Hed Cycling as well, and was also a carpenter for 15 years, working in business with his dad.  The two friends have been home brewing for the last 10 years.  Finally, it was time to open their own business.  When they were looking for a location, they found the perfect opportunity in the old Schmidt Brewery building in St. Paul.  Clutch Brewing Company, located on the mezzanine level, is part of several local businesses in the building, now known as the Keg and Case Market.

As community-oriented businessmen, they also look for creative ways to work with others.  For example, they used honey from local vendor Worker B in one of their craft brews.  They also used mushrooms from another local vendor in another special craft beer.  Both enjoy working in their brewery, doing what they love.  According to Max, it makes the long days easier.  They do schedule in time for fun with their patrons, with Taster Tuesdays, Vinyl Vednesdays, and Trivia Thursdays.

They credit Century College with giving them the foundation they needed to get to where they are today.  "We took our time to explore our interests, and learn more about the world, while we were working, and honing our business skills.  Century College's flexible and affordable classes were the perfect fit for us.," says Jordan.

Find out more about Century College's: