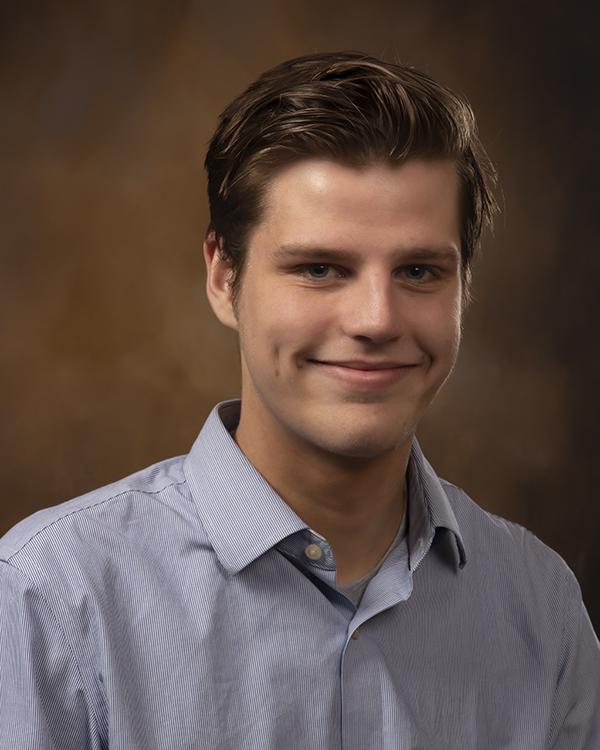 At the age of six, Dominic Cudd knew he wanted to be a musician when he began taking piano lessons.  At his doctor grandfather’s urging, he first played in public at a benefit for Hennepin County Medical Center when he was twelve. By tenth grade, he was composing music for a local theatre production of “The Little Prince.”

Now, at 19, the award-winning Century College Music Sophomore writes and composes music, sings, and plays guitar, trumpet, and piano.  "I'm comfortable performing," Dominic explains. "It's a natural high for me, and I love making people happy."

Dominic chose Century College while he was researching community colleges in Minnesota. "I was looking for a college with a good music program, and Century had that.  It was a great option, and it was affordable," Dominic notes. "Plus, I was able to get $3,000 in music scholarships from the Century College Foundation, which was really helpful.  You write essays, get recommendations from others.  It's important for new students to be aware of the scholarship opportunities at the College."

He's enjoyed his classes with Music faculty Shirley Mier and Elliot Wilcox. “I’ve taken Shirley’s songwriting, ear training, and music theory II classes. Shirley always explains things well and in-depth.  You feel comfortable asking questions – very kind and he loves it when she shares her music.  It has been fun. Always makes composition a fun challenge.  Learning is fun with her,” Dominic says, “And last year, I took Elliot’s Music Theory I class, and he is great.”

Dominic performs with Century College's “Share the Music” program twice a month at group homes, retirement homes, and he played at the recent grand opening of the new Art Gallery at the College.  "It's so fulfilling, and it makes you feel good to bring joy to others," Dominic says. "I love to make others’ days. It's a positive way to use my gifts.

“I like to play old standards, such as American songbook, for example. or 60s 70s old standards  such as ‘Fly Me to the Moon’ or folk music, such as Bob Dylan.”

Outside of Century College, Dominic plays in local coffeeshops, bars, and some restaurants, such as the Golden Valley Country Club, where he takes requests from the crowd, and enjoys playing and singing.

A member of ASCAP, Dominic keeps building and developing his style. He describes his original songs (for acoustic guitar, piano) as "mostly folky, semi melancholic", his singing as raw and emotional.

In recognition of his hard work, Dominic was recently awarded the 2022 Century College Outstanding Student award (Music.)  “I’m very excited, honored, and happy.  I worked hard, and it’s good to have confirmation of that hard work,” Dominic enthuses. “I love Century College--I love this community!”

For Dominic, the best parts of the College have been about focusing on music, sharing his compositions, as well as hearing what other students have written, and challenging himself to write compositions he’s proud of.

Next year, Dominic will transfer to University of Colorado at Denver to begin a singer-songwriter program.  He wants to perform his own music, play gigs, and he also sees himself teaching later in life. He’d like to teach music lessons in a private studio and help children who want to play and achieve their goals.

Meanwhile, he's glad he started at Century College. "Most of my experience with music at Century has involved learning new things, skills-building,  new concepts--a lot of stuff I didn’t know that I didn’t know," Dominic says, "I really learned a lot about music--you receive a top-notch education regarding music theory, ear training, the fundamentals--there's so much great stuff

"And Century College is a great place for beginners. It's very inclusive for students of all skill levels.  The teachers are great--super kind, helpful, and they make it a good experience.”