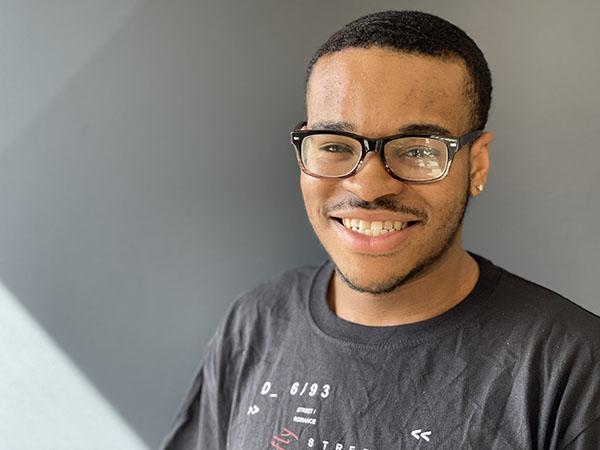 It's not easy to start college during a global pandemic, yet Century College student Edmund McClain has managed to thrive in his first year, doing well in his classes, his two jobs, meeting new people and finding new leadership opportunities.  Being able to juggle multiple responsibilities and succeed in stressful times requires discipline and strong self-motivation--traits which will serve him well in his future career in the law enforcement field.

Edmund, who is from the Twin Cities, chose Century College because he had heard good things about Century's Law Enforcement program and the faculty.  He had visited the campus, and decided he wanted to become a part of the Century College community.   He plans to start his career after he earns his Associate's degree.

Edmund is not only highly motivated to succeed in school and life, he is also building upon and strengthening his leadership and communications skills.  Century College instructor Yanmei Jiang recognized his potential and asked him to tutor her Composition I and II students. He's working as a tutor linked to classes, an experience he especially enjoys.

"My work as a tutor has been great.  Prior to starting, I had a Tutoring 101 session, where I learned best practices, what to expect and how to help our students, so I was well-prepared," Edmund notes. "My favorite tutee is a hard-working Century student, a single mom, with an excellent work ethic.  I look up to her, and she looks up to me.  I'm like a colleague."

Even though many of his experiences have been virtual this year, Edmund has enjoyed building relationships with a variety of students and faculty members.  He's a member of the Black Students Association, meeting and networking with other African American students, and he has joined SSS Trio, where he is getting career guidance.  "The Century College faculty are very supportive," Edmund notes.

Taking advantage of every opportunity to learn and grow is part of Edmund's drive to succeed.  His strong work ethic motivates him to constantly reach higher.  His work "day" at his first job begins at 2:30 a.m. at Fed Ex, and ends around 8:30 a.m.--just in time for his academic day to begin.  With his many commitments, Edmund is organized, has good study habits, and looks forward to each day.

Edmund's ultimate goal is to work his way up the law enforcement career ladder, from being a law officer to a detective, and then working for the FBI.  "My Century College experience has been great," Edmund says, "I'm happy I chose to come to a College where I am supported in my goal to become the best I can be."