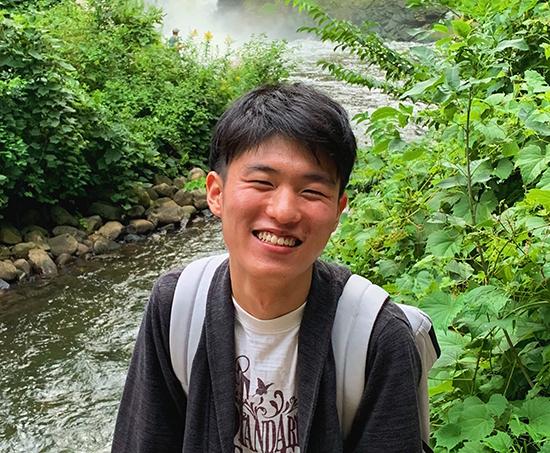 Century College student Ryuto Hashimoto was impressed with Minnesota when he arrived on a one-week exchange program in 2017.  His high school in Osaka, Japan, had a sister-school arrangement with Southwest High School in Minneapolis. When Ryuto returned home, he decided to apply to colleges in America, with the intention of returning to Minnesota.

"Century College's affordability appealed to me, as an international student, and was the primary reason I chose to return to the Twin Cities," says Ryuto

In fall 2019, he arrived at Century College, and was impressed with the warm reception he received. "I really loved how the International Student Services staff members were so welcoming.  ISS Coordinator Emily Batres greeted me and was happy to meet me, and created a great first impression," Ryuto remembers.

"Returning to Minnesota for college was a huge change for me.  I had never lived anywhere without an extensive metro system; however, I was impressed with the city lakes, the park system, and the easy access to nature," Ryuto notes. "And people in Minnesota are so nice. I love the Twin Cities."

Ryuto quickly got involved in both his studies and Campus Life activities, joining the International Student Association.  He is fluent in English, loves learning other languages, and decided to study Spanish at Century. "It was natural for me to become interested in another language--it really expands your worldview," he says. "And besides, one of my best friends at Century College is another international student from Colombia, so fluency in Spanish helps!"  His hard work has paid off.  Last year, he was named the 2020 Outstanding Student of the Year in Spanish.

He is pursuing his Associate in Arts degree, a Global Studies certificate, and an Academic English Proficiency certificate.  In addition, Ryuto works as a Tutor Linked to Classes for English Composition I and II students.  He finds that his expertise in English and Spanish makes him a better tutor.  "I had to pay close attention to my grammar skills, since English is my second language," Ryuto notes.  He enjoys working closely with students, listening to and understanding their challenges and concerns, which makes him a stronger student leader.

Ryuto is active in many areas of  student life at Century, and is a member of the Phi Theta Kappa Honor Society.  This past year, he and a team of PTK students worked on a 6-month long Honors project, researching how to incorporate interracial and intercultural issues into student learning, highlighting the importance of educating citizens about systemic racism and inequality.  Their  project was submitted to the national chapter of PTK.  The group also recently sponsored a webinar featuring a well-known speaker on these issues, and gathered data from Century students following the presentation.

Along with his studies, his tutoring and PTK work, Ryuto is active in the Century College Spanish and Chinese clubs.  He is also a student representative on the Student Senate.  "I'm in touch with the concerns of our students. They are from a variety of backgrounds, and I find something interesting in every tutoring and club session with our students. They give me a lot of ideas, which I then bring back to the Student Senate."

Ryuto plans to take his skills and knowledge as a problem-solver to the next level, as he prepares to transfer to a four-year university.  He doesn't know where he'll land just yet.  For the moment, he is fielding offers from several four-year universities, and will make a decision later in the spring. He will focus on global affairs, with the long-term goal of having an international career, perhaps working for the government of Japan or the United Nations. Wherever he goes, he will take treasured memories of his Century College experience with him. "I've developed strong academic and leadership skills here at Century, and I look forward to the next chapter of my life," says Ryuto.