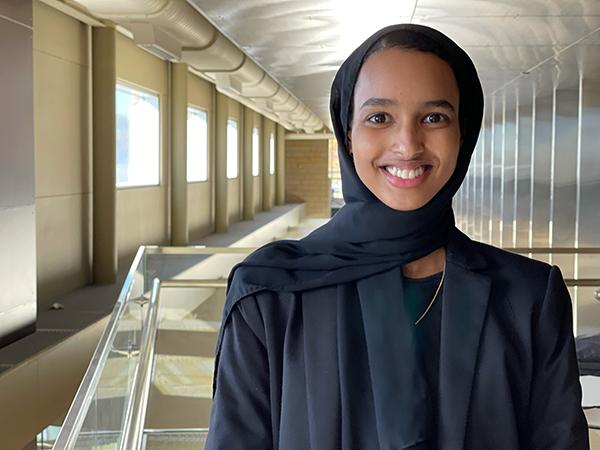 International student Sirad Farah was looking for something extra when she was researching  potential colleges--a place where she would belong.  She needed to find a college where she could envision herself fitting in.  After checking out college websites and social media channels, she found what she was looking for at Century College.  "It’s more than what I expected.  Century College really delivered.  I am very glad to be here." Sirad says.

Sirad was also looking for a change of scenery, and wanted to study in a different part of the world.  She had spent her high school years in Toronto, Canada.  Prior to that, she grew up in Kenya, and had travelled to Tanzania, Zambia, Ethiopia, and Dubai. Along with fluency in English, Sirad also speaks Swahili, Somali and a little bit of Arabic.

"Education is important because it’s a way to enhance yourself," Sirad notes. "And, having been raised by an independent and successful mother, I was taught that progressing and enhancing yourself in terms of education is vital in having an independent life."

Sirad is enjoying her first year at Century College, and her first year in Minnesota.  Sirad has found  her new community through her involvement in Student Life.  She's the Director of Events for the Student Senate and works with the PAC.  She's also serving as President of the Chinese Cultural Club and is Vice President of the International Student Association.

She loves everything about the College.  "Classes are going smoothly and the teachers are amazing, Sirad says. "Everyone at Century College has been nice and welcoming.  I have met a lot of amazing people here. Smart, courageous, independent people,"