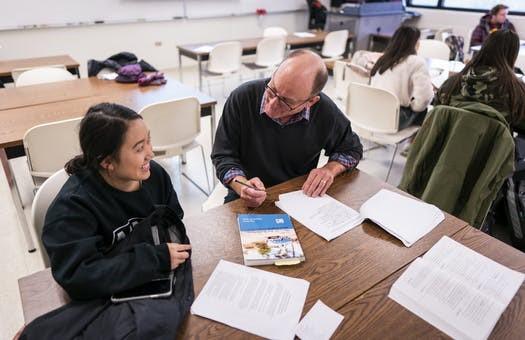 Minnesota’s system of community colleges and public universities is gearing up for what its chancellor calls its “moonshot”: a fresh crack at a goal that has long bedeviled the campuses — and the entire state.

Under its new “Equity 2030” initiative, the Minnesota State system is vowing to eliminate disparities in graduation and other outcomes for its minority, low-income and first-generation students on all 37 campuses.

Student and faculty leaders have welcomed the idea. But some question whether the 366,000-student behemoth can generate new ideas and energy to meet that longstanding goal. The initiative comes as persistent enrollment losses — including lower-than-expected turnout this fall — have spelled financial uncertainty for the system, which has become more reliant on tuition as the state has come to cover a smaller portion of its budget.

The college faculty union has argued the system must redouble efforts to lobby the state for more funding; it’s held up the key role faculty are bound to play in “Equity 2030” to advocate for higher pay in contract talks.

Malhotra says that as high school graduating classes grow smaller and more diverse, drawing and keeping underrepresented students is crucial for the system — and for the state’s economic vitality.

Less than a quarter of American Indian students and just more than 40% of blacks and Hispanics graduated from the system’s seven universities in six years in the most recent class the system tracked, compared with about 57% of white peers.

The group issued a report with a lengthy list of goals, from better measuring in student outcomes to more fully harnessing technology to strengthening ties with industry.

Faculty were guarded about the $300,000 effort, questioning what they saw as its vague goals. The university faculty union hosted its own parallel series of forums and issued its own report.

Malhotra says he felt the effort needed a sharper focus — a clear purpose to the innovation the system was looking to unleash. Closing gaps in student outcomes is a “moral imperative,” he says. It’s also crucial for the Minnesota economy: In the coming years, the state will need more workers with postsecondary credentials, and it will not get them unless its campuses do better at graduating traditionally underrepresented students.

Student and faculty leaders say they are all in. Leaders at the system’s student associations say students have been clamoring for decisive action to address disparities for years, including in a 2016 open letter to trustees.

The Inter Faculty Organization, which represents university professors, notes that closing gaps was the first priority in its report this summer.

“If we don’t change the equity gap, we can no longer claim to be the education capital, and that bothers me,” said Brent Jeffers, the union president.

Outcome disparities have proved intractable lately. In the system’s two-year colleges, the graduation gap between whites and students of colors has barely budged, to 14 percentage points for the class that first enrolled in 2015. At the universities, that gap has widened slightly.

Malhotra says the system will start by taking a closer look at its student outcome data, drilling down beyond racial groups that can be far from homogenous. He said the system needs to better understand the hurdles students face, including basic needs such as food, housing and child care.

Then, the system plans to call on new and existing allies, with a possible summit meeting bringing together state lawmakers, K-12 education officials, employers and philanthropists.

Minnesota State raised tuition this summer after largely holding the line at the state Legislature’s behest in recent years. But this fall 16 campuses found they had over-projected by at least 2% how many students would show up, making the budget picture worse. Meanwhile, negotiations with some employee groups yielded higher than anticipated increases in overall compensation.

Matt Williams, the president of the college faculty union, which is still in talks with the system, says members’ salaries have not kept up with inflation, and the system’s underwhelming opening offer gave faculty “a feeling of whiplash” amid excitement for “Equity 2030.” He says the system must not resign itself to lagging state support. He points to efforts such as a City University of New York program that boosted graduation rates by beefing up student support services, including tutoring and help with transportation and textbooks.

“Our current open access mindset turns into access to failure because there is little support for students once they get here,” he said.

Lawmakers in recent years have balked at fully granting the system’s funding increase requests, including an ambitious $246 million, 17% increase for the biennium this past session. Jeffers agrees the system needs to keep trying to make a case at the Legislature. But, he says, “Until we get this funding, I’m not willing to wait.”

He says the system must tune in to marginalized student voices, asking underrepresentated students who are dropping out why they didn’t make it. At Students United, the university student association, state chair Ola Abimbola agrees. He says some students feel skeptical about the system’s overhaul efforts, which can seem mired in bureaucracy and disconnected from students’ immediate needs.

“Since students are the primary stakeholders in this effort, the experiences and wisdom of students should take utmost precedence in this endeavor,” he said.

Oballa Oballa of LeadMN, the college student association, noted that when student leaders argued against tuition increases this past summer, some trustees suggested their families could make greater sacrifices to support their education — a patronizing “slap in the face.” Oballa, who juggles graduate school and two part-time jobs, is the breadwinner for his refugee family.

Malhotra says he shares the sense of urgency. Later this month, he is planning to announce three “chancellor fellows” who will help him develop a plan and set measurable goals to stay on track on the way to 2030. The system’s campuses will have leeway to tailor the effort to their needs, he said.