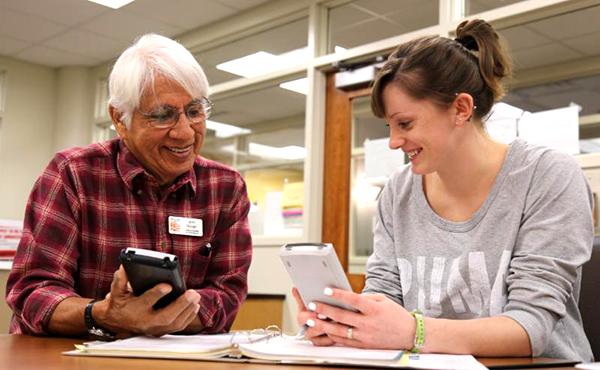 As a Native American student many years ago, John Hunter knew that the chances of him graduating college, statistically speaking, were low. Then and now, Native Americans are among the ethnic groups least-likely to attend college.

But with hard work and perseverance, Hunter earned his college degree, moving onto a successful career as a computer programmer and, eventually, to his dream job at Century College.

Hunter is now a Math Tutor through Veterans Services, working exclusively with military veterans. The road to get there, though, was challenging. He remembers how difficult it was to be the only Native American in his high school.

“I felt lonely,” said Hunter. “I had doubts that someone like me could make it to college. But I hung in there, and I came out the other end.”

“From the top-down, Century College creates an inclusive culture for minorities,” said Hunter. “I’m very proud to be a part of it.”

Hunter is of Winnebago descent on his father’s side of the family, and Creek and Seminole on his mother’s side. These tribes were all forced to relocate through the Trail of Tears, the forced migration of thousands of Native Americans to the western United States.

In graduating from high school and college, Hunter credits the support of his parents. His mother was a teacher, and his father attained a degree from Wichita State through a football scholarship. They instilled the value of education in him at a young age, a value which he continues to espouse.

“So many times in Native American culture, bad habits get established that cycle from one generation to the next generation,” said Hunter. “I’m just lucky that I was able to be a part of a cycle where education is promoted.”

After 30 years as a computer programmer, it was perhaps inevitable that Hunter would eventually follow in his mother’s footsteps and turn to teaching. Along with his value for education, Hunter inherited the desire to help others.

“In the old Native American way, we look after each other,” said Hunter. “That’s what I’m doing when I’m tutoring. I’m sharing my knowledge and trying to improve other people’s lives.”

Hunter makes certain to distinguish teaching from tutoring. The idea of getting in front of a class terrifies Hunter – he prefers the one-on-one relationship he gets with tutoring.

Whether the subject is math or life, Hunter is happy to help veteran students. He has a great amount of appreciation for veterans, which he attributes in part to his Native American upbringing.

“Native American’s have tremendous respect for the people who have defended our country or our way of life,” said Hunter. “We’ve always held veterans in a high place of honor.”

“If they need help and are willing to do the work, I’m there for them,” said Hunter. “I know first-hand how hard math is for some people, particularly if they don’t have the support of their families or come from challenging circumstances.”

When it comes to support for students, Century College stands out to Hunter. He remarks that Century College, through services such as TRIO and after hours tutoring, does everything possible to help students succeed.

“Century College has a lot of strong support for students,” said Hunter. “I’m amazed. I never had anything like that when I was a student.”

Hunter, in particular, is impressed by the supportive environment that Century College creates for minority students. He notes the strength of the Multicultural Center, the active veteran’s services department, and recalls seeing a “Native American Tribe of the Month” display on West Campus.

“That just blew me away – I’ve never seen anything like that before,” said Hunter.

Of all the work environments that Hunter has been a part of, from corporate to collegiate, Hunter has enjoyed Century College the most.

“I really like working at Century College,” said Hunter. “I like the people I work with, and I like the administration – they really try to get to know the staff. They make you feel valued.”