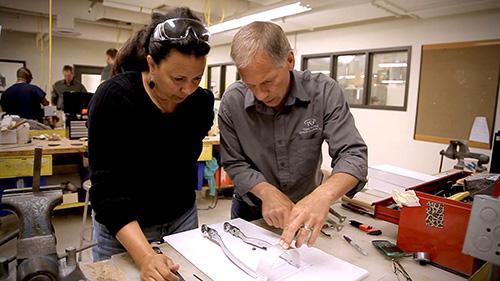 On June 7, Working Nation, a nonprofit campaign dedicated to educating the United States about the looming unemployment crisis, released a video featuring Century College’s Orthotics and Prosthetics programs. The video shares a number alarming statistics about the future of industry.

Right now, two million people in the United States wear prostheses. Due to a rise in obesity, vascular disease, and old age, an additional 28 million are at risk for amputation. To meet the demand for these patients, the supply of orthotic and prosthetics professionals needs to increase by 60 percent by 2025.

With such a large need for professionals in the field, it’s hard to believe that only 13 colleges in the nation have orthotic and prosthetics practitioner programs, and only six have technician programs. The reason, according to Katie Voss, Director of the Orthotics and Prosthetics Clinical Applications Program, is that it has long been seen as a niche industry.

“I’ve been getting contacted this summer by former students once a week asking if I have anyone who can work for them,” said Voss. “I don’t have enough graduates to meet the demand.”

Since its inception, Orthotics and Prosthetics education at Century College has been what Voss calls “mastery-based.” With its focus on individual study, students can progress through the coursework at their own pace until they perfect the competencies they need.

The key to reaching mastery, according to Voss, is working with real patients.

“When students create an orthotic or prosthetic device and it works but is not perfect, that can cause a lot of discomfort for patients,” said Voss. “It’s really helpful when students are able to make an adjustment for a patient and see how big of a difference those tiny changes make.”

This is part of the department’s hands-on approach, which allows students to practice creating the orthosis or prosthesis themselves. This approach differs from other colleges that focus their Orthotic and Prosthetic programs around lectures.

“It’s a learning-by-doing atmosphere that really allows students to master the skills they need,” said Voss. “It’s especially beneficial for students who may have a disability or English as a second language.”

Going Beyond the Requirements

Another aspect of the hands-on approach that brings students closer to mastery is a required seven-week internship. Local businesses that are partnered with the Orthotics and Prosthetics department are naturally eager to have the help of Century College students in meeting their workforce needs.

These partnerships also take the form of advisory committees. The purpose of these committees is to help Century College keep up with advancements in the industry.

“The industry is always changing, so we want to keep up with trends in the field,” said Voss. “We follow our accreditation guidelines of what we have to teach, but we go beyond that by responding to feedback from businesses and former students.”

The Fab Lab, Century College’s digital manufacturing center, is a large reason that the program is capable of keeping up with trends. The Fab Lab allows students to work with advanced technologies such as computer-aided design, manufacturing tools, 3-D Printing, and a robotic carving machine.

These programs are structured so students, if they wish, can progress from the technician level to the practitioner level at their own pace. The practitioner program is offered as a Master’s Degree in partnership with Concordia University.

The variety of career options is a big part of why the Orthotics and Prosthetics department boasts a nearly 100 percent employment rate for its graduates. In fact, since prosthetics and orthotics remains a small industry, Voss often attends seminars that consist largely of Century College graduates. For Voss, this is one of the most rewarding parts of her job.

“It’s wonderful to watch students grow and see them advance in the field,” said Voss.