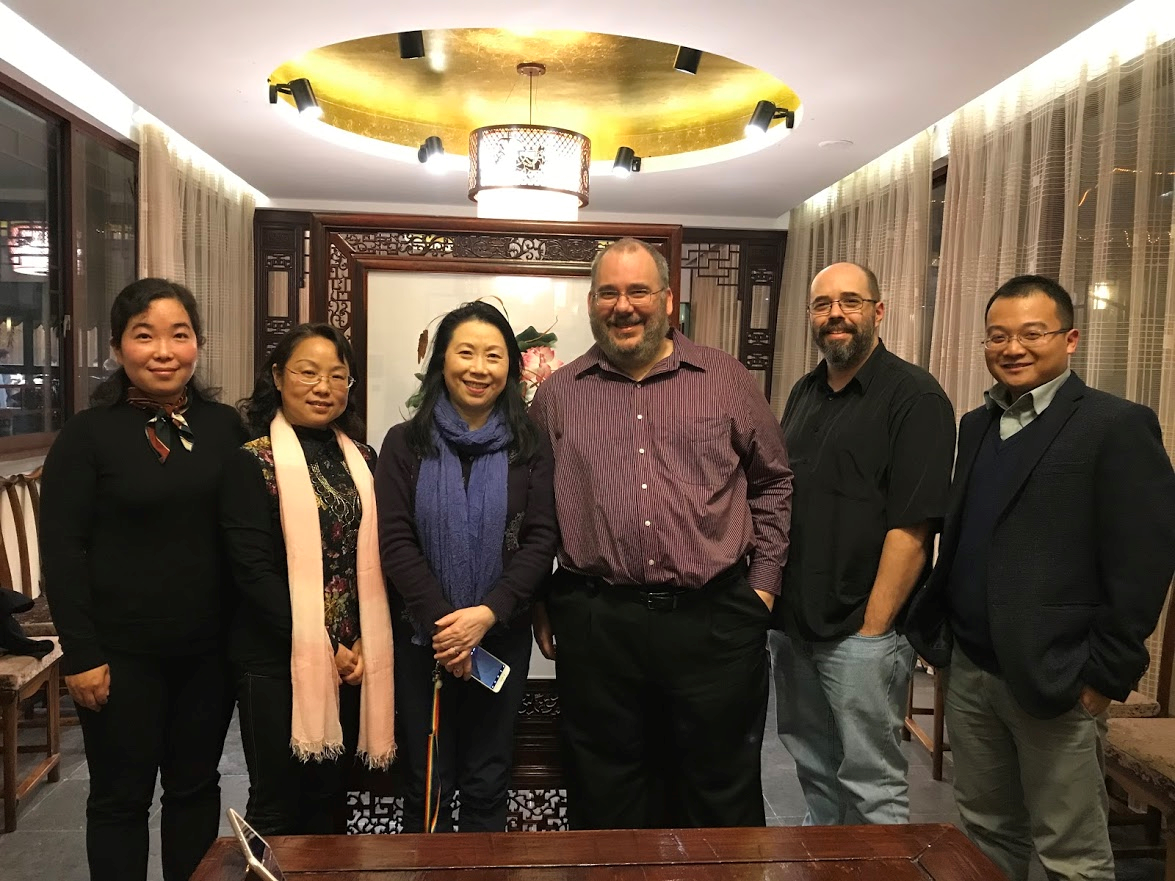 Brian Lewis, Ph.D., an English faculty member at Century College, has spent much of the past year in Shanghai, China, after receiving a Fulbright grant to teach American Literature at Shanghai International Studies University.

Lewis, whose areas of expertise include American Literature, LGBTQ Culture, and Gender Studies, used the opportunity to learn about Chinese culture, how to better teach students who speak English as a second language, and to facilitate global connections for Century College students.

“It's important to create global education opportunities for Century College students,” said Lewis. “In this digital age, we need to be able to communicate with people from all over the world.”

Before Lewis left for China, he had a meeting with Century College President Angelia Millender regarding opportunities for students to travel overseas and the potential for exchange programs among teachers and students.

“I am excited for the possibilities,” wrote Millender to Lewis. “This can enhance our learning experiences on so many levels.”

His efforts to forge academic relationships between international educators and Century College were met with enthusiasm by faculty at Soochow University in China. Following Lewis’ lecture on online learning, Professor Gu discussed the possibility of creating an online course on international communications that Soochow University and Century College students could take together.

Lewis also had the opportunity to share his extensive knowledge of literature and online teaching through a series of lectures across East Asia.

His lecture series extended to colleges in China, Taiwan, and Thailand. The topics included Gender Trouble in a World of Alternative Facts: Transgender Identity in Contemporary American Literature and Culture, Teaching English Online: Helping Students to Learn in Cyberspace, and GLBTQ Culture in America and China: Definitions, Experiences, and Comparisons.

For his lectures at Chulalongkorn University, widely regarded as the No. 1 University in Thailand, Lewis was featured on the cover of the school newsletter. The article featuring Lewis went into detail regarding his lecture on online teaching entitled Teaching Writing and Literature Courses Online. What works? What Doesn’t?

In this lecture, Lewis discusses the ways educators can most effectively teach online courses, emphasizing the importance of communication and community. Lewis contends that the impersonal nature of online courses causes anxiety for students, who feel disconnected from their teachers. He encourages online instructors to actively engage with students through face-to-face interaction, whether in person or over a live-stream video application such as WeChat.

“Dr. Lewis’ first session, like all his classes,” reads the article, “was extremely successful with interested participants from both the Faculty of Arts and other institutions.”

A New Approach to Teaching

While the lecture series in East Asia was a great success, it is teaching in China that had the greatest impact on Lewis.

While in Shanghai, Lewis taught a postgraduate course in Short Novels, and an honors course in Classic American Literature. He was impressed by the students’ hard work and dedication to learning, but he made a point to encourage them to engage in discussion.

“This year has taught me so much about the importance of listening to student voices,” said Lewis. “My students in China didn’t like to volunteer in class; however, when they are called upon, they do a very good job.”

Lewis recognizes that American students can be shy as well, so he plans to integrate more student presentations and opportunities to lead group discussions when returning to Century College, as he did for his students in China.

Despite being reticent to speak up initially, Lewis’ students in China responded enthusiastically to his discussion-based courses.

“The intellectual curiosity these students had was extraordinary,” said Lewis. “After we learned there was a mix-up and I was only supposed to be teaching the class every other week, the students told me that they still wanted to meet every week anyway,” said Lewis.

The most critical thing Lewis may have learned, however, is the importance of connecting the classroom with the world.