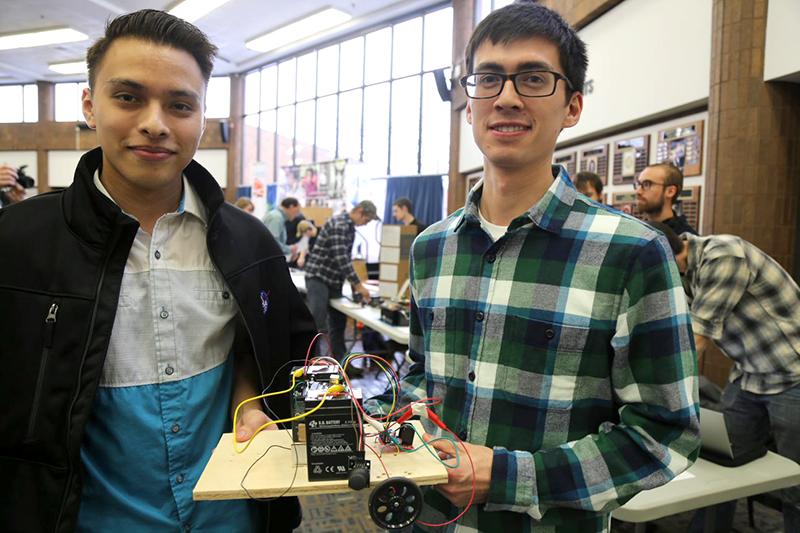 The noise was loud, but hardly noticeable amidst the excitement. An Automatic Ball Launcher could be heard firing foam pellets into large plastic bags over 50 feet away. The mechanical legs of the Tetrapod (or “Spider”) Robot, could be heard lurching forward as the sirens of the Fire Alarm Robot blared, while Sebastian Bot played notes on a small digital piano.

“The Robot Show and Engineering Showcase was a great opportunity to showcase the talent and creativity of our Century College Engineering students,” said Engineering Faculty Member Tim Grebner. “It gave the public a chance to learn more about the program and have fun, too.”

The students, who made extensive use of Century College’s state-of-the-art Fab Lab, had five weeks to complete their projects. Judges were present to vote on their favorite robot. The winner was the Candy Color-Sorter. In a three-way tie, the runners-up were the Pizza-Cutter, Marble Sorter, and Bottle Opener robots.

State Senator Chuck Wiger, who was present at the ceremony, seemed enthusiastic about all of the projects. In fact, during a light-hearted exchange with students, Senator Wiger could be seen trying to catch marshmallows launched by a robot. He was most enthusiastic, though, about how Century College’s Engineering program would impact the lives of students and the community as a whole.

“I was very impressed by the projects, and enjoyed seeing how Century College prepares their engineering students for success,” said Senator Wiger. “They will be vital contributors to our region’s workforce and the health of our community.”

How the Robots were made

For individuals without engineering knowledge, it was difficult to comprehend the technology behind their robots. But it was clear that constructing the robots was a challenging and time-consuming endeavor.

“You see the code on paper, and it probably adds up to about 300 words,” said student Millian Mobasi, who constructed a Drink-Mixing Robot with two partners. “That took five weeks. It was hours and hours of trial and error.”

Each student was required to use the Arduino, a revolutionary open-source electronics prototyping platform. In layman’s terms, it’s a programmable computer that uses electronic sensors, lights, and motors.

“The use of the Arduino in the projects has made their robots more versatile. It’s really taken their projects to the next level,” said Judge Kate Lange, a recent graduate of Century College’s Engineering program. “They’ve also utilized 3D printing more than in recent years.”

For Mobasi, who plans to transfer to the University of Minnesota to study mechanical engineering, this was a great stepping stone toward a career working with diesel engines, and a huge confidence booster.

“It shows that if you keep working hard, you can accomplish things you could only imagine before,” said Mobasi. “It makes me feel really good about what I’ve chosen as a major.”

Many participants, such as Armstrong O’Connell and Sarah LaLonde, strive to make the world a better place with their work. O’Connell hopes to work for an electric car start-up. LaLonde wants to create things that help people. She also wants to inspire other young women to get into the field of Engineering. She acknowledges that Engineering is a traditionally male-dominated field. But she certainly doesn’t believe it has to be.
“I want girls to know that you can care about how things look and how you look, but you can still be smart, you can do math and science, and you can do anything a man can do,” said LaLonde.

The Future of Engineering is at Century College

The Robot Show and Engineering Showcase was a great sign of things to come for Engineering students and Century College.

“The showcase demonstrated that these future engineers are learning valuable, high-demand skills needed in our workforce,” said Grebner. “They will help close the skills gap both locally and nationally.”

In the world of manufacturing, technology is rapidly evolving. Naturally, the skill-set of engineering students will need to evolve with it. The $6.4 million Advanced Technology Center, currently in development, will poise Century College to meet changing workforce demands and continue to close the skills gap. It will allow Century College to develop curriculum in robotics, robotic welding, and artificial intelligence, among other STEM programs.

While the future is certainly exciting at Century College, engineering students at the showcase were appreciating the present.

“It’s been an awesome learning curve going from a rough sketch to a functioning robot,” said Mobasi. “I’m really happy with how our project turned out.”