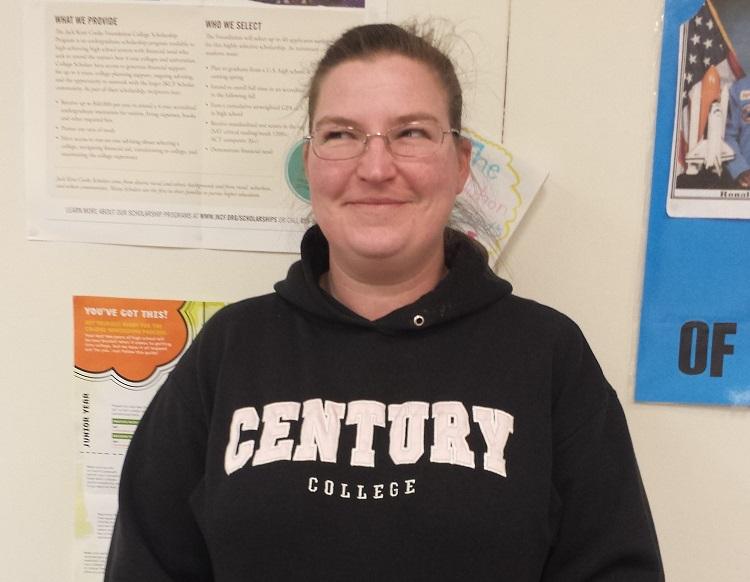 Sometimes, a simple piece of good old-fashioned paper mail can change your life. Century College alumna Erin (McDonald) Lange never expected to have the entire second half of her undergraduate studies, and a large portion of her graduate studies completely paid for, but she did – all because she responded to a letter.

The letter was a notification that Lange qualified for support from SSS/TRIO at Century College, and she applied. Later, with support from her TRIO advisor, Wade Warner, she applied to the Jack Kent Cooke Undergraduate Transfer Scholarship. She was awarded the scholarship in 2008, and it changed her life.

A Little Help from TRIO

While at Century College, Lange, along with many fellow Phi Theta Kappa members, was a constant visitor in the TRIO center – utilizing tutors, studying in the quiet space, having access to counselors to help her figure out her class schedules, and of course, having dedicated staff pushing her to pursue opportunities she might not have taken, such as applying for scholarships.

Lange also founded the Scholars Club at Century College. The club was born of a desire to find other students who wanted to pursue graduate studies and to prepare academically. Faculty advisors who helped form the club included Paul Roach (Anthropology) and Elizabeth Lanning (Psychology).

The club was a small group that approached instructors to see if they needed help from students operating as (free) research assistants on campus. Philosophy Faculty Member Ida Baltikauskas provided Lange an opportunity to read books on world religion (instructors often receive books to review), and Paul Roach gave her a project on replicating birth order and waist-to-hip ratios.

Lange transferred from Century College to St. Catherine University in 2008. For free.

Now, Lange teaches Social Studies for Gateway to College at Hennepin Technical College, which is a unique Intermediate School District 287 Area Learning Center offering a second chance for high school students between ages 16-20 who recently dropped out or may be on the verge of dropping out.

She has also led her high school Civics and Government students in a month’s long unit on raising awareness about an omnibus bill that would address the need for increased funding and education services for students with mental health needs. This project culminated with students planning, hosting, and presenting at a Mental Health Awareness Showcase. The omnibus bill did pass the Minnesota Legislator and students were excited to see their work in action.

All this from someone who almost didn’t go to college.

“I didn’t think I could be successful in college, didn’t see it as something in my future that I deserved, and was afraid to go to a four-year university,” Lange recalls.

But, as a single mom to a kindergartener, she found the courage to give Century College a try, and she found her confidence, passion, and determination here.

“The staff and teachers are SO helpful. As long as you put in your effort toward success, they will help make sure you succeed, too,” Lange affirms.

Lange can’t thank the SSS/TRIO staff enough for helping get herself and her son out of poverty and on track to a brighter future. She was so impacted by her experience, she even invited her advisor, Wade Warner, to her wedding.