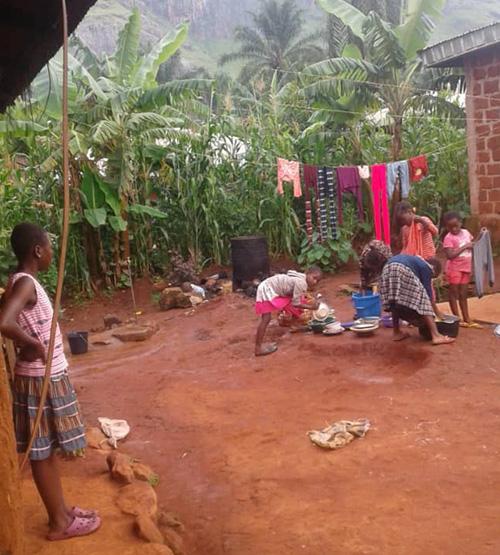 In August, Century College was responsible for installing a solar energy system for a family living in a village in Cameroon. The village is afflicted by poverty, which is perpetuated by an unreliable power grid that often leaves its approximately 10,000 residents without power for long periods of time.

With the leadership of Solar/Renewable Energies instructor Scott Randall, the $500 solar system was installed by a local villager on a Century College student's home, where the student's family lives.  The student's name is not included in this article over safety concerns.

The solar system provides a reliable source of power for a family accustomed to living without refrigeration, charged cell phones, and electric light.

“Words cannot express the joy it has brought to my family,” said the student. “It’s been a great blessing.”

After peaceful protests in 2016 by English-speaking citizens calling for regional autonomy were violently suppressed, the secessionist movement developed into an armed insurgency calling for a new country, Ambazonia.

The French-speaking regime has retaliated by cracking down on the English-speaking regions, ransacking property, burning down homes, and attacking unarmed civilians.

The village has been greatly affected by the conflict.

“The insecurity of the village as a whole is a threat to everyone,” said the student. “The people are living in fear.”

As the conflict heightens, communication has become increasingly critical. In a region where internet is limited, residents rely on their cell phones to connect with family members and keep abreast of recent developments.

The solar system has provided the student’s family, and neighboring villagers, a consistent means to charge their cell phones.

“If our phones are not on, we’re going to be ignorant of what’s going on in the region,” said the student. “The presence of solar energy means that we can get information at any time.”

For the student’s family, cell phone access is more important than ever. As of September 9, government forces cut off transportation from English-speaking regions to the French-speaking regions, destroying roads and vehicles in an effort to prevent residents from participating in the upcoming elections.

“Without solar power and functioning cell phones, the student’s family might not have known about the restrictions,” said Randall.

A Higher Standard of Living

While cell phones provide the student’s family with a means of communication and greater safety, the solar system has also drastically improved their overall quality of life.

“With this solar installation, my family is 100 percent assured of power,” said the student. “It has raised their living standard.”

A constant light source has made a significant difference for the student’s family, who is forced to remain in the home for much of the day due to a 6 p.m. military-imposed curfew. Electric light, easily taken for granted in first-world countries, allows them to be productive in the home in the evening.

“The student’s mother has communicated to me how big of a difference it makes for them just to have lights,” said Randall. “If the children need to study, or if the family needs to complete tasks such as preparing food, they can do that now.”

In the village, where the typical income is $100 per month, residents live under harsh conditions.

The two-way relationship between energy and poverty is well-documented. A reliable source of energy enhances agricultural production and allows business to thrive, among other benefits.

The solar system for the student’s family is a prototype, according to Randall, designed to determine what problems the system may encounter. Once the testing process is complete, Randall intends to replicate the system, allowing many to be used across the village.

“There’s already people saying that they’re saving for their own solar system and want to get it installed soon,” said Randall. “They’ve seen the one the student’s family has, and it’s working fantastic.”

Randall is also looking into working with the local villagers to develop new jobs through more solar installations within the community.

In the ongoing effort to combat poverty in Africa with renewable energy, Randall is glad to help. With this solar installation, a brighter future for the student’s family and the village is on the horizon.