Tanisha Morgan Works to Build Relationship between Police and Community 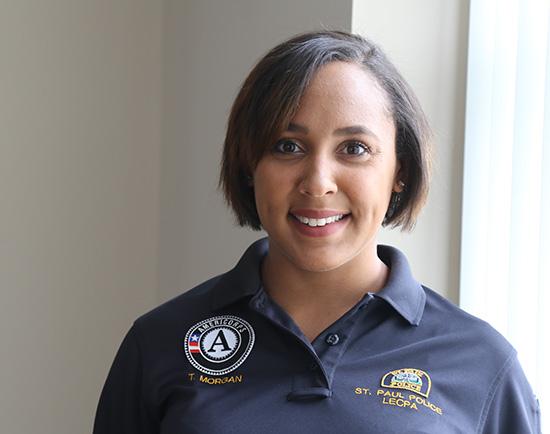 Ever since she was in 9th grade, when she learned about human trafficking in India, Century College Student Tanisha Morgan knew she wanted to work in the field of mental health.

Morgan aspired to go overseas to India. But with the birth of her daughter three years ago, Morgan turned her attention to home.

“Having her made me realize that Minnesota has issues,” said Morgan. “I wanted to make a bigger impact and create a better future for my daughter.”

Morgan is part of the Law Enforcement Career Path Academy at the Saint Paul Police Department. The program, which is for low-income minority students, is a partnership between Century College and AmeriCorps.

Through the program, Morgan works with the Community Engagement Unit, designed to bring together citizens of Saint Paul and the department to help law enforcement better serve the community.

Discovering a Path at Century College

Morgan began attending Century College in 2013 to take her general education courses, unsure of what she wanted to do with her life. A year later, Morgan was pregnant with her daughter.

“One of my teachers noticed something was wrong and asked me to come to her office,” said Morgan. “I started crying and told her how I was going to drop out.”

But her teacher encouraged her to stay in school, and connected her with resources on campus. It was through one of the campus services that Morgan was connected with Human Services Instructor Sheila Gunderson, who inspired her to pursue the Human Services Degree Program.

Morgan, a victim of childhood trauma and abusive relationships in early adulthood, wanted to work closely with victims of abuse like herself.

“Coming out on the other side of trauma, I wanted to help these people live in the moment, and not let their past hinder them from what they want to do in the future,” said Morgan.

After completing her Human Services Degree, Morgan decided she wanted to combat mental health issues before they start rather than after the fact. She soon re-enrolled in Century College and joined the Law Enforcement Career Path Academy.

This inspired Morgan to work with Community Engagement Specialist Johnny Howard to put on an event to introduce the new Mental Health Unit to the residents of Saint Paul. The unit works proactively to connect citizens in need with mental health services, preventing incidents related to mental health crises.

“So many people try to hide their mental health issues,” said Howard. “We’re trying to get people to talk about it and understand that it’s okay to have these issues.”

The event is an effort to not only raise awareness of mental health resources, but part of a greater effort to foster a stronger relationship between the community and the police – a relationship Morgan acknowledges has often been tense.

“I tell people that I’m in the system because I want to make a difference, not because I’m taking sides with the police,” said Morgan. “There shouldn’t be sides – I want to build a bridge between the police and the community.”

A Better Home for Her Daughter

Morgan hopes to build that bridge by demonstrating what she and the Saint Paul Police Department are doing to respond to the concerns of the community.

“We’re trying to be partners with the community in making this city better,” said Howard. “We need to have a lot of communication. We want to know from people how we’re doing and how we can do better.”

Connecting with the community, according to Morgan, goes hand in hand with reflecting the community. Morgan would like to encourage more people of color and women to enter law enforcement to better represent Saint Paul, one of Minnesota’s most diverse cities.

“I believe people are more inclined to engage with someone who has a similar background to their own,” said Morgan. “By getting more people of color and women into the police force, it shows that we’re trying to make a difference in community relationships with police officers.”

Forging a stronger bond between police and the community is how Morgan strives to create a better home for her daughter.