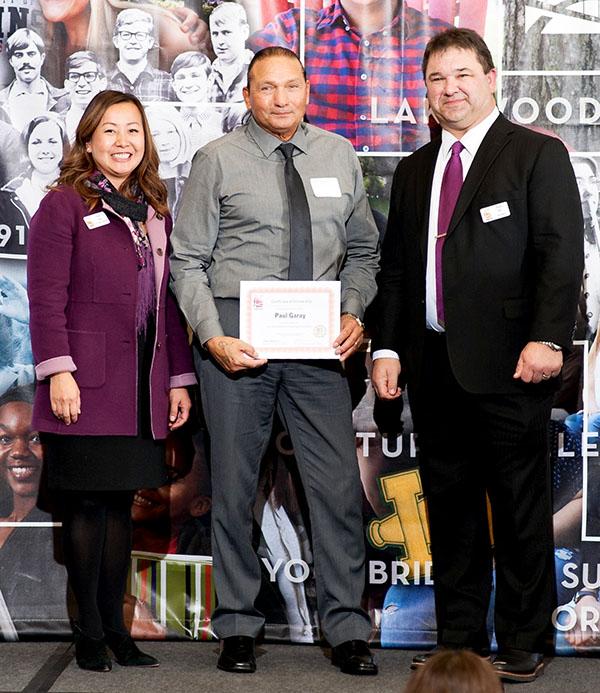 While waiting to be interviewed, 65-year-old Century College student Paul Garay wasn’t sitting and twiddling his thumbs. He was hunched over his textbook, surrounded by papers and flanked by his notebook.

Even after the challenges Garay has faced and the things he has accomplished in his life, leaning into retirement had no appeal to him.

“A lot of people ask me why I’m going back to school at 65 – I’m retired and service-connected, with one knee replaced and the other three-fourths replaced,” said Garay. “I’m not doing this so much to go out and get a job. I’m doing this because I’m able to do it. I want to be an active member of society for as long as I can.”

Garay was once an accomplished chef who led a number of large-scale restaurants, including one in the French Quarter of New Orleans, another on an off-shore oil rig, and a Holiday Inn at St. Cloud. (He recalls once feeding 2,690 people there within a 20-minute span.) Severe injuries to both of his knees, though, eventually derailed his life’s passion.

On one fateful day years ago, as part of the 82nd Airborne Division at Fort Bragg, North Carolina, Garay was scheduled for a routine jump training exercise. This day, though, happened to be particularly windy. The jump master made the call to go through with the jump anyway.

Once the parachutes were deployed, Garay and several of his fellow soldiers were swept off into a densely forested area. The injuries were gruesome. One branch stuck into Garay’s leg, and upon making hard contact with a large bough, both of his kneecaps, in his words, “flipped all the way around.”

Garay continued to work as a chef for as long as he could. But as he got older, the pain became excruciating. As has happened all too often in the United States, he was prescribed opioids.

Garay succumbed to addiction almost immediately. His large prescription certainly fed into it – at one time, Garay was receiving over 180 Percocets each month. He recalls taking 15 pills a day just to get through one shift working as a chef in a Country Club.

“When you’re addicted, you don’t even realize you’re addicted,” said Garay. “It kills the pain for a time, but it also kills your feelings. It numbs everything – not just your body, but your brain.”

When Garay finally came to terms with his addiction, he tackled it with the same tireless determination that has driven him through his entire life. It was difficult – the pain in his knees came back ten-fold, and the emotions he hadn’t felt for a long time came rushing in. With his wife’s support, Garay got through it. He has now been sober for over 10 years.

Working as a chef was no longer an option. But to keep busy, he volunteered for Habitat For Humanity. Even this eventually became too demanding on Garay’s knees.

“When I toured Century College, I felt right away like I belonged here,” said Garay. “I noticed that Century College was more diverse, and I saw that they were very accepting of people that are a little older. It’s nothing to see an older person carrying books around here.”

Another key factor was Century College’s support of veteran students. Century College serves the second-most veterans out of any school in the state, and has a federally-funded Veterans Services center.

Up for the Challenge

Going back to school for the first time in over 40 years was a huge challenge. But this time, it was a challenge he signed up for.

With lessons from high school not exactly fresh in his mind, Garay admitted he needed all the help he could get. Fortunately, at Century College, help was easy to come by.

“The amount of help here for students is incredible,” said Garay.

Garay delved into the people and resources that have been vital to his success. Patty Fischer and John Hunter, the writing and math tutors from the Veterans Center respectively, have been there whenever he has needed help. The Summer Scholars program was critical to preparing him to enter academia again. And the Century College Foundation, which awarded him a $1,000 scholarship, gave him more than financial assistance.

“Just knowing that there was someone paying attention to me, who saw I was trying to better my life and cared enough to help, was huge,” said Garay. “The recognition was worth more than the money.”

Garay likens the scholarship to a pat on the back as he continued working toward his degree. It’s Century College’s willingness to reach out to its students that makes the school stand out to Garay.

“There are so many groups and clubs here, that everyone’s able to connect with each other. I notice that a lot here,” said Garay. “Seeing that tells me Century College advocates for human connection.”